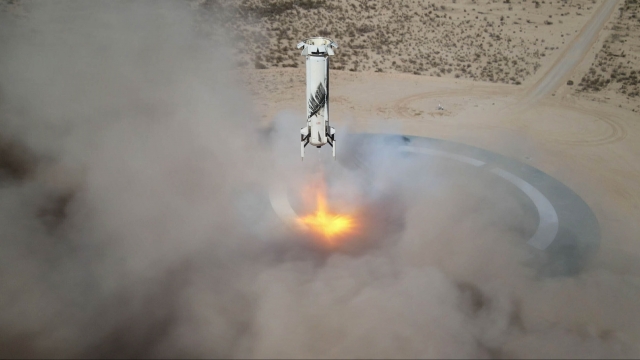 Up until this point, just one private spaceflight company has organized every space tourist mission over the past two decades.

“It used to be, 20 years ago, we’d reach out to people and they think we’re completely crazy with this, this idea of flying to space," Tom Shelley, the president of Space Adventures, said.

For the past two decades, Space Adventures has been the only private company sending tourists to space — doing so with the help of Russia’s space program.

Now the space tourism industry is quickly expanding — thanks to Blue Origin, Virgin Galactic and SpaceX all competing for a foothold in the market. But what exactly are these companies offering?

SpaceX wants to send paying customers to the International Space Station for roughly a week.

Blue Origin and Virgin Galactic, meanwhile, are only offering suborbital flights — meaning the rocket goes high enough to reach the edge of space and then comes right back down.

“They’re important stepping stones to getting to the place where it’s normal routine and something that the average person sees as something that’s accessible to them," Wendy Whitman Cobb, a space policy analyst, told Newsy.

Take the term “accessible” with a hefty grain of salt. The more time you spend in space, the more it’s going to cost you. Blue Origin hasn’t released its prices, but Virgin Galactic has been selling tickets for as much as $250,000. And SpaceX is asking for $55 million per person.

Some of the orbital launch costs go to NASA, which charges $35,000 a night per passenger to stay on the ISS. That covers supplies and amenities — like food, air, internet and even the toilet.

Shelley: “There’s also some costs associated with insurances that are needed for your medical qualification, as, again, there’s a lot of doctors who are involved in and making sure you’re in good health and ready and plan for any eventualities, medical emergencies that may happen in space.”

And then there’s the training. Again — the longer your mission, the more intense the preparation is. Space Adventures’ clients train for about three months before launching into orbit.

Shelley: “They learn all the basics of the operation of the Soyuz spacecraft that they’re flying on, and also the International Space Station.”

Whitman Cobb: “If we’re talking about suborbital flights, training is about — each of the companies are envisioning about two to three days of training beforehand.”

So the costs and training might be extreme — but analysts say there are around 1 million people wealthy enough to afford the ticket price.

But will the prices ever decrease so much that ordinary people can foot the bill? Or will this remain a vacation destination solely for the rich? Wendy Whitman Cobb says we’re in a wait-and-see mode.

Whitman Cobb: "As much as people want to go to space, there just might not be demand. So I think the next couple of years are going to tell us about what that market ends up looking like. And if demand is high, costs come down, more players get into the game, and then that really does sort of open the way for more opportunities."