The State Of Virtual Reality 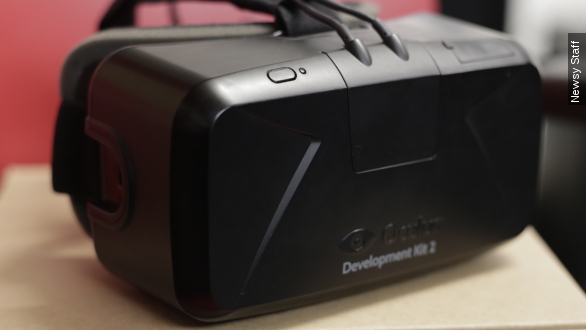 Virtual reality is still a young industry. What's available? And what should we expect from our immersive new future?

The future's so bright, you've got to wear a headset that fools your brain into thinking it's in an entirely different environment.

Virtual reality, as a gaming medium and more, is gaining significant momentum.

And it's come a long way from its infancy. Just ask anyone who's used a Virtual Boy. (Video via Gaming Historian)

Now, a number of competitors are settling in for a fight over eyeballs.

Oculus VR, the poster child, started in its recognizable form in August 2012 on Kickstarter.

Since then, it's worked through four prototypes, two of them available for developers to purchase and tinker with. (Video via Oculus VR)

And the attention has gone mainstream. Facebook snapped the company up last year for $2 billion. Mark Zuckerberg wants to make VR "a part of daily life for billions of people."

In March of 2015, Valve and HTC arrived on-scene with what appears to be the first real competition for Oculus. The Vive headset brings specs mostly on par with those of the Rift and adds position-tracking handheld controllers.

Sony, meanwhile, has been teasing Project Morpheus, which is so far the only device designed to operate on game consoles. The PS4-exclusive headset first appeared as a prototype in March 2014 at the Game Developers Conference and again in 2015.

Samsung's Gear VR rounds out the top four as a set of wireless goggles that accept certain Galaxy Note smartphones and borrows their processors and sensors. Samsung built it in cooperation with Oculus VR, which is handling the software.

It was made available for outright purchase December of 2014, though it's still aimed at developers who are building software for VR and requires a companion Galaxy S4 or S5. (Video via The Verge)

Oh, and one honorable mention is Google's Cardboard project, which wraps certain Android smartphones in a temporary headset enclosure. (Video via TechCrunch)

All of these can be considered distinct from augmented reality headsets, such as Google Glass, which place information and visuals on top of an existing environment rather than replacing that environment completely.

Each of these headsets uses the same basic operating principle: Replace the wearer's environment with a wide-field-of-view display that tracks the motion of their own head.

Look left, or lean forward, and so will the view in the headset. We can't describe the feeling in great detail because it really has to be experienced.

The medium is extremely subjective, not least because different people have different tolerances for VR sickness. (Video via IGN)

But if there's one thing today's VR headsets have in common, it's that they're all shooting for the elusive concept of "presence." (Video via Road to VR)

"Presence" in VR is something of a theoretical perfection: a virtual environment so convincing the user's brain accepts it as reality. There are a number of technical hurdles to clear.

Latency: The time between user input and pixels changing on a headset's screens. The lower this number, the closer the feeling to authentic motion. If it's too high, it can induce lag.

Frame rate: The speed at which the headset's screens refresh their images. The higher this number, the smoother the whole experience is. Oculus, at least, is shooting for 90 frames per second or more. (Video via Sony)

Resolution and field of view: The apparent size of the screen. The higher the resolution, the harder it is to distinguish individual pixels on a screen a few inches from your eyes.

The wider the field of view, the more immersive the experience is, and the more easily you'll be able to spot nearby aliens. (Video via Sega)

Positional tracking: How the headset matches your position in real life with the camera's position in the program, be it a game or some other software. The more closely these two match, the easier it is for our inner ear to reconcile what our eyes are seeing with what our head is doing.

Input: How a program accepts control from the user. Traditional keyboards and controllers work, but Sony and Valve are experimenting with two remotes that let you use your hands in-game. (Video via CNET)

The better you can execute on all of these, the more immersive the experience and, generally, the less likely your brain is to violently reject the data your eyes are receiving.

Tested describes current attempts at presence as a "sliding scale of immersion."

"While presence in DK1 and DK2 were strong, being able to properly stand up and move around in the environment were insane," said Linus Tech Tips' Luke Lafreniere.

And, of course, you'll need software to run on these new headsets.

There are 100+ games in Steam's library with at least partial VR support, including crowd favorites such as "Team Fortress 2."

And there is a huge community of independent developers working on games and other experiences. (Video via Samsung)

On the official side: Valve is working on SteamVR, which places the user in a 360-degree room-scale environment.

Google has engineers working on a version of Android for VR headsets.

And hollywood is interested in bringing its media to the new platform. (Video via Legendary Pictures)

But a lot of this comes back to the hardware: The leading headsets have yet to finalize their specifications, so developers don't know exactly what they have to work with yet.

Keep in mind the first consumer VR headsets are expected to require a PC with some significant graphics and processing muscle. In the case of Gear VR, you'll need a high-end Samsung smartphone.

The final question is: when? You can get a Gear VR now if you want. HTC says it will be selling the Vive by October 2015, price unknown.

At time of publication, neither Oculus nor Sony had announced availability or pricing for their headsets. Guess we'll be stuck with plain-old reality for now.