The Syrian Artist Who 'Paints On Death' 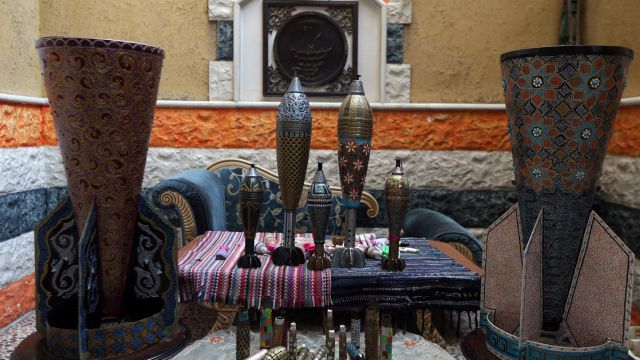 This Syrian artist turns weapons of war into art like this.

His name is Akram Abo Alfoz, and he calls his art "Painting on Death."

He lives in the besieged city of Douma, which is just east of the Syrian capital Damascus in an area called Eastern Ghouta. According to the United Nations, there are 282,500 people under siege by the Syrian regime in the region.

Alfoz told Newsy he paints for many reasons, one of which is his children. By decorating deadly bombs and bullets, Alfoz said he can help ease his children's fear over the weapons.

He also told Newsy he decorates weapons "to send a message to the whole world that we are people of peace and love and we are not terrorists as the Syrian regime claims."

Before Syria broke out into civil war, Alfoz used to paint glasses. He never imagined he'd one day be painting mortar rounds and bullet casings. Since the war, he's lost members of his family, his home and his job.

Alfoz says he wants his art to serve as a testimony "to the cruelty of the countries that help in our annihilation such as Russia, Iran and the Syrian regime."

This video includes images from Akram Abo Alfoz / Painting on Death and clips from Douma Revolution, President of Russia, Khamenei.ir and the Presidency of the Syrian Arab Republic. Music provided courtesy of APM Music.