The Top Sports Stories Of 2014 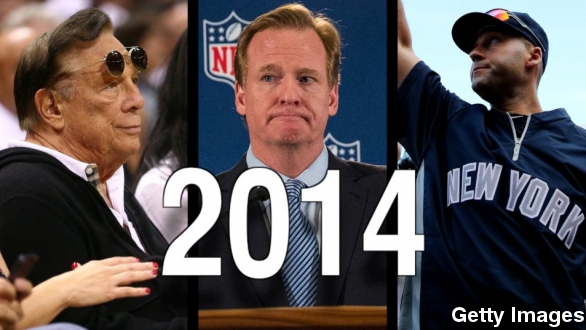 From Derek Jeter's retirement to scandal in the NFL, 2014 was filled with many on and off-the-field headlines.

It’s been a wild year in sports and we here at Newsy are here to wrap it all up for you. Here are the Top 5 sports stories of the year.

The retirement of Yankees’ SS Derek Jeter. After 20 season, the captain finally called it quits, playing his last game in pinstripes Sep. 28. And he went out in total Jeter fashion — drilling a base hit to knock in the game-winning run in his last game at Yankee Stadium.

“I’m going to take my talents to South Beach and join the Miami Heat,” James said on ESPN in 2010.

After a stint with the Heat, ‘The King’ is back in Cleveland, smoothing things over.

This time, he made the announcement in print via Sports Illustrated on July 11.

Clevelanders, for the most part, seem to be welcoming him back with open arms, choosing to forget those jersey-burning images from just a few years ago. (Video via Nike)

Next up — “I am banning Mr. Sterling for life,” NBA Commissioner Adam Silver said in a press conference.

The fallout from comments made by then-LA Clippers owner Donald Sterling.

“You’re associating with black people. Do you have to,” Sterling purportedly said in a taped conversation.

That audio conversation purportedly between Sterling and his girlfriend was leaked to TMZ.

“I am not a racist,” Sterling said on CNN.

It quickly led to Sterling losing the team and plenty of public backlash.

Fast forward three months to May 10 and Sam became the first openly-gay athlete to be drafted into the NFL, selected in the 7th round by the St. Louis Rams.

While the former SEC co-defensive player of the year performed well in the preseason, he was later cut by the team, picked up for the Dallas Cowboys practice squad, and later cut again.

The NFL brought the issue of domestic abuse front and center this year even though it likely didn’t want to. (Video via TMZ | ABC | WCBS)

“I got it wrong in regards to the Ray Rice matter,” NFL Commissioner Roger Goodell said.

To Adrian Peterson being charged with child abuse —

And to all the arrests in between. (Via KNXV | Sacramento Bee | Charlotte Observer)

The NFL, including commissioner Roger Goodell, took a hit from a PR standpoint —

— leading to a revision of NFL policies on domestic abuse.

And campaigns airing during NFL games featuring players speaking out against domestic violence.

“No more.” (Via Joyful Heart Foundation)

While the world of sports wasn’t always glorious in 2014, it was certainly eventful. Thanks for making Newsy your outlet for sporting news this year.

This video includes images from Getty Images and music by Broke For Free / CC BY NC 3.0