The UK Has Voted To Leave The EU. So What Happens Now? 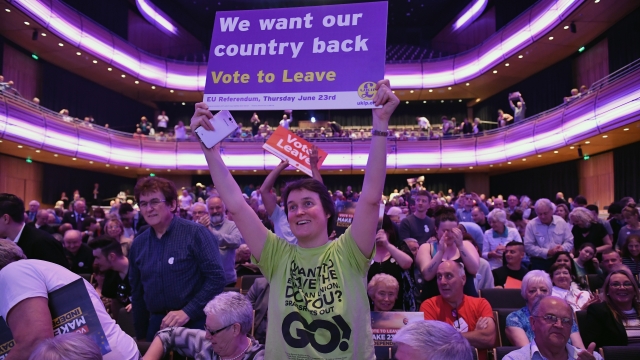 Voters in the U.K. have decided to leave the European Union.

The economic fallout from the vote hit almost immediately. The pound fell 7.5 percent against the dollar to its lowest in 30 years on Friday morning, and a major U.K. stock index plunged as much as 8 percent, with banks taking the hardest hit at as much as 30 percent.

And the effects are reverberating outside the U.K. Analysts warn the U.S. stock market could also take a hit; meanwhile Germany, France and Ireland have already seen prices dip.

The results also sparked the resignation of U.K. Prime Minister David Cameron, who campaigned vigorously to stay in the EU. Cameron said he will remain in office until the Conservative Party's conference in October.

The vote to leave won't immediately eject the U.K. from the EU; there's still a lot of paperwork left before that happens. But it does represent a massive shakeup within the U.K. and around the world.

"Leave" campaigners argued exiting the bloc would give the U.K. more autonomy to set its own laws, while "remain" supporters warned leaving would trigger an economic and political catastrophe.

Leave campaigners also argued EU membership cost the U.K. too much money and autonomy and delivered too little. That campaign managed to close a sizable gap with the remain camp in the polls, which had the two sides neck-and-neck on voting day.

SEE MORE: The Brexit, Brexplained: What Happens If The UK Leaves The EU?

Now that the U.K. has voted for the door, the country has two years to negotiate the terms of its departure with other EU nations. Those discussions will probably involve renegotiating trade, military and immigration relationships between the U.K. and the majority of Europe.

Meanwhile, political leaders in France, Sweden and the Netherlands have hinted they may call for referendums to also exit the EU.

This video includes images from Getty Images and clips from Channel 5, The Telegraph, The Guardian, the European Council and the BBC. Music provided courtesy of APM Music.