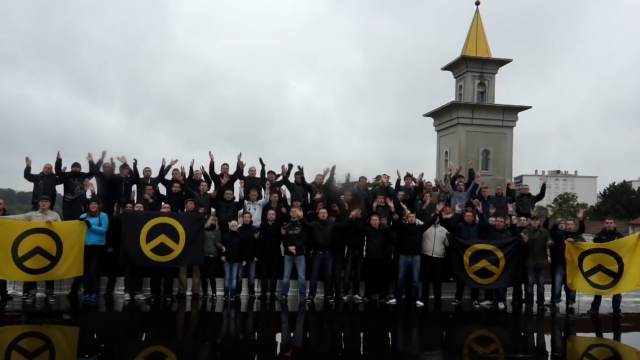 Identitarianism is linked to at least six mass shootings. It became popular in Europe a decade ago and is on the rise in the U.S. today.

A White nationalist movement that fueled a new rise for Europe's far-right continues to gain momentum around the world and is helping to lure in and radicalize new recruits, according to terrorism experts. The French Government dissolved the world's first major "Identitarian" group in February, but not before its underlying ideology spread to at least 16 countries, including the United States.

"I have a feeling that we are heading for a great conflict," said Detective Chris Adamczyk, a veteran police officer in Mesa, Arizona. He specializes in extremism networks and works in the department's Intelligence and Counterterrorism Unit. "Something is coming around the corner," he said.

Adamczyk, who is part of an elite national network of local police officers who specialize in terrorism and extremist groups, said White nationalist groups have become increasingly emboldened in their efforts to recruit. He notes an explosion of propaganda, stickers and banners warning of a coming "invasion" of immigrants.  One of the most active groups he is tracking is Patriot Front, which has been operating not just online but also physically hitting the streets of communities  throughout Arizona and much of the nation. "That level of just in-your-face style racism is not something that I encountered in my previous, you know, 16-18 years of law enforcement," he said.

Rising White Supremacy, In The U.S. And Around The World

Newsy investigates trends in White supremacist groups in the U.S. and abroad.

FBI Director Christopher Wray told the Senate Judiciary Committee this March that the threat of domestic terrorism in the U.S. is "metastasizing" and testified, "We saw a huge uptick in violent extremism, in that broad bucket, over the course of last year."

Underpinning much of the rise and connecting many White nationalist groups is the adoption of a philosophy called Identitarianism, which began to take off in Europe over the last decade.  At its core, Identitarianism is a fear of something called “The Great Replacement”, where waves of immigrants are allegedly overtaking White Christian identity. The philosophy, which has been widely debunked by those who say immigration statistics show far less migration in Europe that is being claimed by the groups, is still helping to create new extremists and radicalize some of them.

"I absolutely believe that there's a massive change that's occurred, like on a scale that I can't even put into words," Adamczyk said. In September, he published a thesis on Identitarianism to earn a master's degree in security studies through the Naval Postgraduate School's Center for Homeland Defense and Security. The report, which earned the CHDS's Outstanding Thesis Award, issues a warning for fellow law enforcement professionals. "While based on the same core ideological elements and entrenched against the same enemies, Identitarianism in the United States is much more volatile and unstable than in Europe. Additionally, American identitarian groups are linked to violence at all levels and seem to view violence as axiomatic in the movement."

Fears of an “invasion” or replacement of Whites came out in full view during the 2017 Unite the Right rally in Charlottesville, where torch-carrying White men chanted, "You will not replace us." Now, the Great Replacement theory is linked to at least six mass murders, according to the Global Project Against Hate and Extremism's Heidi Beirich, who testified before a House subcommittee on Intelligence and Counterterrorism in July. She cited a Department of Homeland Security warning that “violent extremists have adopted an increasingly transnational outlook” driven by connecting with “like-minded individuals online.” DHS specified the sharing of the “ethnic replacement” idea, which Beirich says motivated shooters who attacked at the Tree of Life synagogue in Pittsburgh, at an El Paso Texas Walmart and at mosques in Christchurch, New Zealand.

Adamczyk names at least six groups he says have launched in the U.S. around Identitarianist beliefs since 2015, including Vanguard America, Atomwaffen, the Proud Boys, Identity Evropa/American Identity Movement, Rise Above Movement, Patriot Front and The Base.

"I think the real danger of Identitiarianism is that the ideas behind it -- it is essentially White nationalism -- are being mainstreamed," said Marilyn Mayo of the Anti-Defamation League.

Identitarianism first started taking off with the formation of a French anti-migrant and anti-Muslim group called Generation Identity. The group launched in 2012, with a video warning of a confrontation. “This is not simply a manifesto, this is a declaration of war,” a member of Generation Identity declared in the video.

Generation Identity became notorious in France for headline-making actions like trying to prevent refugees from reaching the Mediterranean shore and patrolling the mountainous French border regions.    It has become such a threat the French government officially just dissolved the group. In an email to Newsy, a spokesperson for the French government said “its discourse has led to violence.”

The group’s underlying Identitarian message has already spread to organizations in at least 16 other countries beyond France, which is why Adamczyk says local law enforcement and community leaders need better training to spot it early in people they encounter."The lessons of pre-9/11 actually apply right now," he said. "We didn't connect the dots, right? And so let's now take the time to know that what we're dealing with and let's do our best to to stop it from happening again."

Riin Aljas, a Scripps Howard Foundation data reporting fellow, contributed to the reporting for this story.

As journalists, we strive to cover stories that keep our communities safe. This story is part of a series looking into how extremism is impacting our nation. If you have an opinion or a related idea you believe we should be covering, we encourage you to reach out.  Mark Greenblatt is the senior national investigative correspondent for Newsy and the Scripps Washington Bureau. Follow him @greenblattmark, email a story tip to mark.greenblatt@scripps.com or send a secure message to markpgreenblatt@protonmail.com. Lauren Knapp is senior video editor for Scripps Washington Bureau and can be reached at Lauren.Knapp@scripps.com or followed at @LCKnapp.