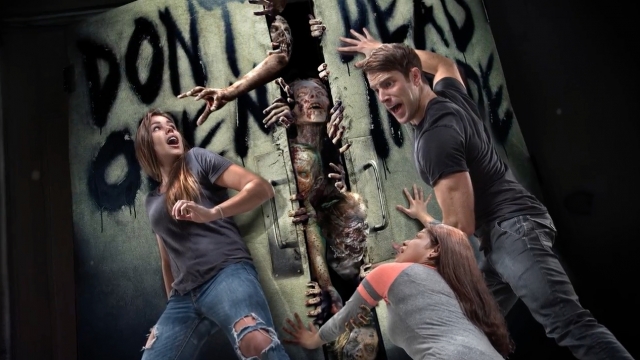 A new attraction featuring the show's undead will open at Universal Studios Hollywood this summer.

Zombies have been terrorizing the residents of Georgia and Virginia on AMC's "The Walking Dead" for years. But soon, fans of the show won't be protected from them by their television screens.

That's because the zombies are headed to Hollywood. Or, more specifically, Universal Studios Hollywood in Southern California.

The show has been involved with Universal Studios' Halloween Horror Nights for several years. But this will be the first time the theme park has an entire attraction dedicated to "The Walking Dead."

USA Today spoke with the show's executive producer, who said the new attraction will use both animatronics and live performers to re-create moments from "The Walking Dead"'s six seasons.

Similar to the park's Halloween Horror Nights, the new attraction will focus mainly on the zombies.

"The Walking Dead" is following in some pretty big footsteps — attractions based on "Harry Potter," "The Simpsons," "Jurassic Park" and "The Fast and the Furious" have been popular with Universal Studios visitors for years.

While its 2016 ratings have been slightly down, "The Walking Dead" is still the most watched show on AMC. In fact, its highest-rated episode so far was the season five premiere in 2014 — a record 17.3 million people tuned in to watch. Not too shabby.

It also spawned the spinoff "Fear the Walking Dead," and it looks like a third show about the undead may be in our future.