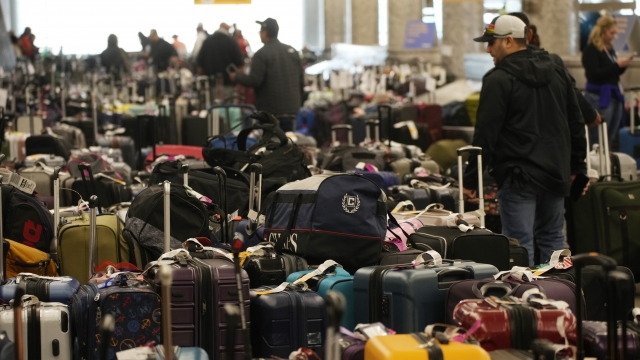 Southwest Airlines says weather stranded crews all over the country without enough replacements available in the big hubs.

From coast to coast there's a sea of furious passengers and stranded bags.

The airline is in the midst of an epic meltdown, precipitated by brutal cold and snow that swept the country but perpetuated by what employees call an outdated scheduling system that has outright failed.

"They’re not really letting us change our flights on the app so we have to literally wait in this line," Christian said.

Call centers are so packed that's a lost cause, too.

While the winter storm crippled operations for everyone, only Southwest has all but collapsed — apparently totally unable to recover from the mess so far. The airline’s somewhat unique scheduling structure, whereby crews fly from point to point across the country rather than out and back to the same city, has stranded crews all over the nation. The airline says it’s basically trying to reset.

The cancellations have separated thousands of passengers from their bags. In many cases, travelers were told their bags will go on to their final destination — even if they won’t.

"As soon as they were loading the bags, they canceled our flight. And that was four days ago. And we’ve called and called. No one’s returned a phone call. We have no idea where our bags are," said Tiffany Boyles, a Southwest Airlines passenger.

And while Southwest has offered its "heartfelt apologies" and promised to "make things right" with passengers and employees down the road, the federal government is now getting involved.

The Department of Transportation says it will investigate the meltdown and try to determine if Southwest’s cancellations were "controllable."

Southwest Airlines canceled 2,900 flights Monday, according to FlightAware. Nearly 2,500 more flights had already been canceled as of Tuesday morning.