The World United To Fix The Ozone Hole, So Why Not Climate Change? 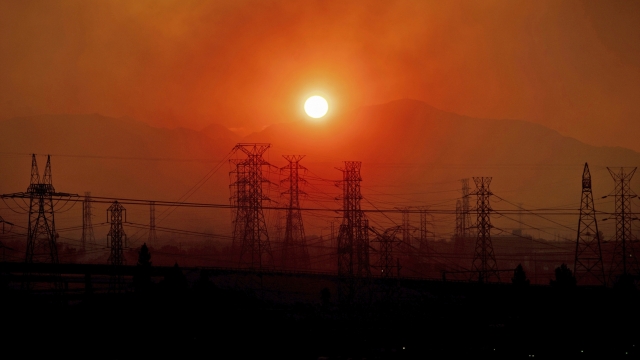 In the first installment of "Operation: Earth," Newsy's "In The Loop" dives into the ozone solution and its relation to climate change issues.

A recent report from the United Nations included some dire news about the fight against climate change. It said current pledges from countries to curb emission will probably not stop global warming from going over 1.5 degrees Celsius (2.7 degrees Fahrenheit) above pre-industrial levels in the next few decades – the point at which some damage may be irreversible, and tens of millions may face life-threatening effects of climate change. And all that’s assuming countries actually follow through on their current pledges.

In the first installment of Newsy's "Operation: Earth" series, we're looking at another global environmental crisis that was pretty much solved – a crisis that received a very different response.

In the mid 1980s, a team of scientists in Antarctica found evidence the ozone layer was thinning fast, and a research team led by Susan Solomon soon figured out which chemicals were most responsible for it. They’re called chlorofluorocarbons, or CFCs, and they were everywhere. CFCs are found in everyday items like aerosol sprays, fridges and AC units.

The ozone functions like a natural sunscreen for the Earth, protecting us and our planet from harmful UV radiation. The chlorine in CFCs breaks down the molecules within the ozone layer and created a "hole" over Antarctica, where the layer was the thinnest.

Within just a couple of years, world leaders began to act. The U.N. coordinated a landmark treaty known as the 1987 Montreal Protocol, which banned CFCs and other chemicals. There was a huge investment in finding new technologies, and industries quickly found safer replacements. Consumer boycotts and political action seemingly rallied the world together. The U.S. Senate even ratified the Montreal Protocol 83 to 0.

The production of CFCs and other harmful chemicals plummeted. CFC consumption went from 800,000 metric tons in the 1980s to an estimated 156 metric tons in 2014. The EPA suggests that by 2050, the ozone layer will be back to where it was in 1980.  So today, the damage to the ozone from the last century has been reversed, and healing the ozone even bought the world valuable time in the fight against climate change.

Now you may be thinking, "But why has climate change been so much harder to fix, and is there a way to get back to this kind of global cooperation?"

One huge difference was that the solution then was much simpler: find less harmful chemicals to replace the CFCs. Climate change is a hugely multifaceted problem, with different factors and different responsibilities across countries.

"Climate change is just much more complicated in many ways," said Jennifer Marlon, research scientist at Yale School of the Environment. "Depending on where you live in the United States or anywhere in the world, climate change can have a very different face. If you are living in the tri-state area — New York, New Jersey, Connecticut — then it looks like larger and more intense hurricanes like Superstorm Sandy that hit. But if you're living in Tennessee or Kentucky, then it might look like more mosquitoes or it's more poison ivy or more tornadoes."

Another difference was the urgency: The threat of radiation and potential skin cancer from the Ozone hole was a much more immediate danger than something that, to many people, feels like it’s still decades away.

"It's kind of like saving for retirement," Marlon said. "You have to start early to prevent cancer later in life. You have to quit smoking now because it takes your body time to heal. These are slow changes and they take time to unfold, and the difference is compound over time. There are these long sort of built-in lags like the ocean absorbing heat, and it takes a while for those impacts to be felt."

Lastly, efforts to face climate change have had to struggle against a massive misinformation campaign, led by ExxonMobil and other oil companies.

An investigation in 2015 revealed Exxon was aware of climate change as early as 1977 and even employed top scientists to conduct unprecedented research on the causes of climate change. But their findings largely weren't communicated with the public, which wouldn't become aware of human-caused climate change until a decade later. By 1989, the company created the Global Climate Coalition to publicly question the scientific basis for climate change – even as their own experts wrote internal memos about how the impact of human emissions "cannot be denied."

ExxonMobil is still battling court cases over their role here. They claim there is an “orchestrated campaign that seeks to delegitimize ExxonMobil by misrepresenting [their] position on climate change and related research to the public."

The decades of misinformation stalled efforts on climate change and sowed confusion that we are still reckoning with today.

"We know that right now, 72% of Americans say yes, climate change is happening," Marlon said. "It's real, the planet is warming... But the minute you go to causes, those numbers change. So only 57% of Americans understand that humans are the primary cause. Burning coal, oil and gas is responsible for virtually all of the warming that we're feeling right now."

In 2009 at COP 15, then-President Obama backed down from a stronger legally binding climate agreement. Only the U.S. Senate could officially ratify the deal, so it needed to be more politically popular. Representatives from low-lying and island countries, who were already facing the threat of climate change, did not take kindly to this.

"It appears that we’re waiting for some senators in U.S. Congress to conclude before we can consider this issue properly," said Ian Fry, Tuvalu delegate to the United Nations Climate Change Conference. "It’s an irony of the modern world that the fate of the world is being determined by some senators in the U.S. Congress."

So, these are the major reasons why the fight against climate change has become politically harder than the fight to fix the ozone, but that doesn't mean it's impossible. We may have lost valuable time, but some winds might be changing.

"Through our survey research, we find it's much more complicated than just Democrats believe and Republicans don't," Marlon said. "Now the issue, however, is that that 9% who really think it's a hoax or not warming are overrepresented in Congress and in positions of power, so they're also very well funded. So they speak very loudly, and they're organized online and they're posting on websites. So it seems like it's much more than 9%. It's really only 9% in the public."

And the U.S. has rejoined the Paris Treaty, which sets a new goal of keeping global temperatures from rising over 1.5 degrees Celsius above pre-industrial levels. That benchmark has been used in legislation across countries and was a huge victory for the countries facing the effects of climate change.

"This is already an all-hands-on-deck effort across our government and across our nation," Secretary of State Antony Blinken said. "Our future depends on the choices we make today."

There are new challenges and a lot of lost time, but it’s worth looking back at history to remind ourselves we have solved a global crisis once before. And while we will continue to see worsening effects of climate change before it gets better, that doesn't mean all hope is lost yet.

"People in positions of power, corporations, are doing more," Marlon said. "They're greening their supply chains. We're talking about ESG now and companies trying to become more sustainable, and so it's starting to permeate all different parts of our lives and our work lives and our personal lives. That, to me, is where hope really comes in, because we know what so many of the solutions are, but we have to just keep pushing."