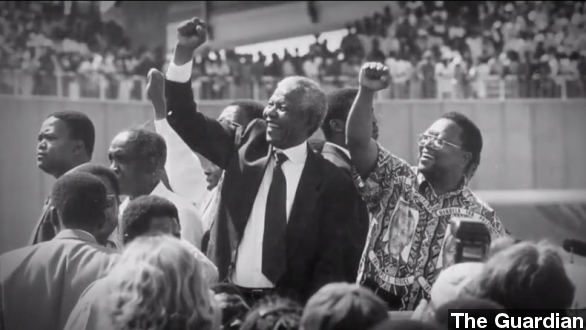 Reactions poured in from people all over the world paying tribute the former South African president.

The death of former South African President Nelson Mandela Thursday drew reactions from people all over the world — and some not quite Earth-bound.

South Africans stayed in streets outside the 95-year-old Mandela's Johannesburg home, celebrating his life by singing songs and dancing late into the night. (Via ABC)

Meanwhile in Harlem, the marquee at The Apollo Theater reflected the impact of Mandela's legacy, reading, "HE CHANGED OUR WORLD." (Via Twitter / @ApolloTheater)

The most long distance tribute came from NASA, which tweeted a picture of South Africa from the International Space Station.

Other tributes played out on Earth with public figures remembering their time spent with Mandela. (Via Twitter / @billclinton, @MikeTyson, @GloriaEstefan)

Morgan Freeman and Idris Elba, men who played Mandela on the big screen, released statements praising the leader's fight against oppression and remarking on what an honor it was to portray him. (Via New York Daily News)

One of the more touching messages came from former boxing champion Muhammad Ali — a man who revered Mandela just as much as Mandela revered him.

"Was Muhammad Ali a hero of yours?"

"Well, naturally, as far as boxing is concerned. And what he has done, he was my hero." (Via RadlyCenter.org)

One of the last images of the two before Mandela's health took a sharp turn for the worst comes from the 2003 Special Olympics World Summer Games, where the Nobel Prize Winner and the former heavyweight champion squared off. (Via YouTube / iconic)

Ali spoke on his relationship with Mandela in a statement released by the Muhammad Ali Center saying, "What I will remember most about Mr. Mandela is that he was a man whose heart, soul and spirit could not be contained or restrained by racial and economic injustices, metal bars or the burden of hate and revenge. ... He is now forever free."

Back in South Africa, Mandela will receive a state funeral. According The Guardian, provisional government documents say Mandela will lie in state for three days at the capital Pretoria before the ceremony.