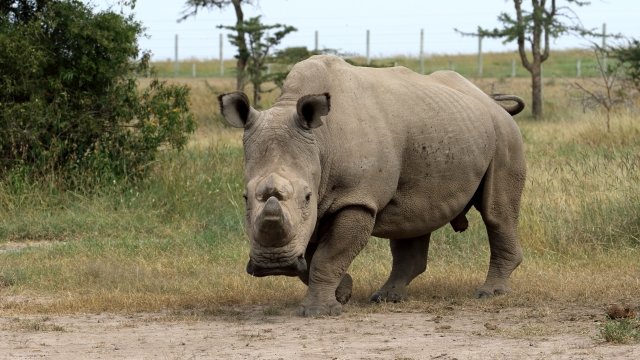 Doctors decided to euthanize the 45-year-old rhino Monday because his health was rapidly deteriorating.

The Kenyan conservancy taking care of the 45-year-old rhino, named Sudan, said he'd been sick recently and was being treated for "age-related complications" and "extensive skin wounds."

Doctors decided to euthanize Sudan Monday after his condition worsened.

Sudan previously lived at a zoo in the Czech Republic before he was moved to Kenya in 2009 in an attempt to promote breeding within the species.

Armed guards stationed around Sudan and his fellow rhinos protected them from poachers.

The northern white rhino is a subspecies of the white rhino. Now that Sudan is gone, all that is left of the subspecies are two females — his daughter and granddaughter. Scientists are hoping to use techniques like IVF treatments to save the rhinos from extinction.