There Are 4M Syrian Refugees. Why Has The US Taken Only 900? 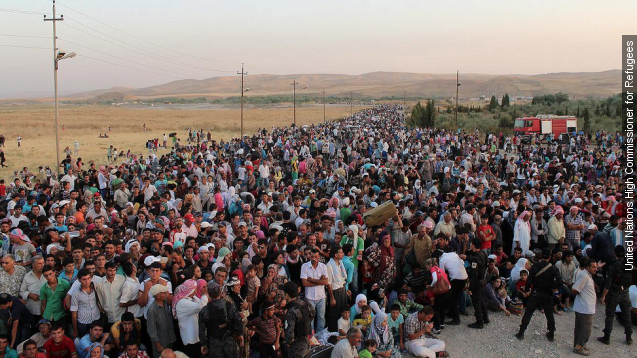 Since the Syrian civil war broke out in 2011, the U.S. has accepted just over 900 refugees from the country. Should the U.S. be doing more?

Picture for a moment what it would be like if, within just a few years, the U.S. population climbed 26 percent.

That's absurd, of course. But that's the reality in Lebanon. About half the size of New Jersey, the country now hosts over 1 million Syrians who have fled their homes.

They're just a fraction of the 4 million Syrian refugees who've now spread across the region. But as neighboring countries close off their borders and impose new entry restrictions, these refugees are running out of places to go.

Western countries are under pressure to share the burden. Already, the U.S. has put over $4 billion toward the humanitarian situation since 2011. That's more than any other country.

But when it comes to refugee admissions, the U.S. lags behind many of its allies. In 2014, the U.S. took in more than 69,000 refugees from around the world. Just 105 of those were from Syria. To put that into some perspective, refugees were accepted in greater numbers from 17 other countries — countries including Russia and Moldova.

Since the war broke out in 2011, the number of refugees has increased exponentially. U.S. refugee-admissions haven't. Of nearly 4 million refugees, the U.S. has admitted 902 — many of whom had applied for refugee status before the war broke out.

Part of what's holding up refugee resettlement is the screening process, which can take up to a year or more. Typically refugees are first referred by the U.N. Human Rights Council. Then there are background checks, then there are interviews, then there are medical checks — all of this before they can even get on a flight. There are plans to speed up that process. The State Department expects to let in up to 2,000 Syrian refugees by the end of the year.

Thing is, no one's really happy with that number. Human rights advocates say the U.S. could do far more. And then there are those who say, with more refugees comes more risk.

Because the U.S. doesn't have assets on the ground in Syria the way it does in other countries, vetting refugees is a lot harder. (Video via Amnesty International)

"I think this would be a huge mistake if we bring in these refugees into the United States that could be potentially radicalized," House Homeland Security Committee Chairman Mike McCaul, R-Texas, said.

"Refugees are the most carefully vetted of all travelers to the United States," U.S. State Department spokeswoman Jen Psaki said.

There is one thing just about everyone can agree on: More has to be done to help Syria's children — an entire generation of whom are growing up in a war zone. (Video via UNICEF)

This video includes images from Jens Tarning / CC BY 3.0 and music by Planet Boelex / CC BY NC ND 3.0.