There's No Clear Front-Runner For This Year's Heisman Trophy 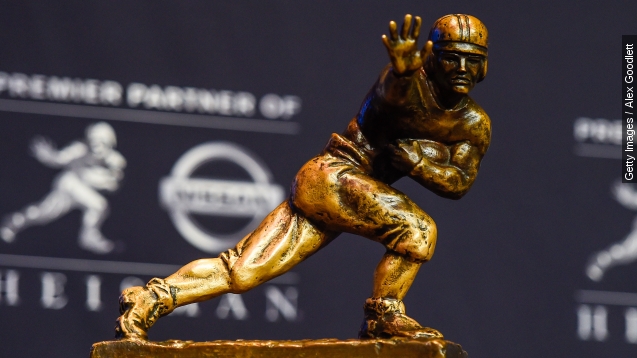 The finalists for the 2016 Heisman Trophy have been announced, and nobody appears to be running away with it.

Now, most years, there's one candidate who appears to be above the rest, but this year's Heisman vote could be one of the closest in recent history.

Henry's got the advantage of running for the second-ranked Crimson Tide, whose ground-and-pound style fits the 6-foot-3, 242-pound running back's style. (Video via AL.com)

He also hasn't had a bad game yet this year, averaging 5.9 yards per carry, along with 23 touchdowns.

McCaffrey is a different type of running back, though, and is making a strong push down the stretch. Stanford's go-to guy is a triple threat: running, receiving and returning.

He shined in Saturday's win over USC in the Pac-12 Championship game with 207 rushing yards, 105 receiving yards, and 149 on-kick and punt-return yards. He also added three touchdowns.

Both Henry and McCaffrey have also shattered the records of former Heisman winners.

But there's absolutely no way we can forget Deshaun Watson. The true sophomore quarterback for the undefeated and top-ranked Clemson Tigers deserves plenty of respect. He's the dual threat with 30 passing touchdowns, 11 rushing touchdowns and more than 3,500 yards through the air.

It's an impressive resume, one that Clemson took pretty literally.

"Are you the Heisman trophy winner? Should you be the man?" the ACC's Jeff Fischel asked Watson.

"I mean, of course I'm going to say I'm the Heisman winner, but we'll just see what happens," Watson said.

Heisman voters also really love quarterbacks. The last five Heisman winners have all been QBs. A running back has only won the award twice since 2000. (Video via Nissan)