Life After The Bee: Ex-Spellers Turn Their Skills Into A Business 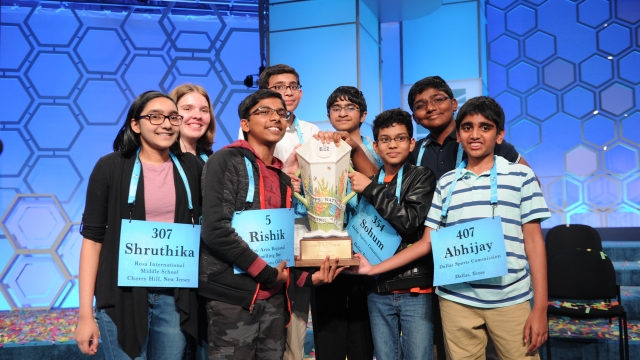 At 18 and 16, Shobha and Shourav Dasari don't spell competitively anymore, but they've turned what they learned into a business opportunity.

Something unprecedented happened at the 2019 Scripps National Spelling Bee: It ended in an eight-way tie. And six of those eight winners had something in common: They used the same study program created by a pair of teenage siblings, both recent competitors.

Shobha and Shourav Dasari are sister and brother with nearly a decade of competitive spelling between them. They teamed up with their parents to turn their expertise into a study prep business called SpellPundit.

"We've condensed the dictionary from 500,000 words into 120,000 words. And we've organized those words by increasing difficulty, and arrange that and put that into a user-friendly software that spellers can use to test themselves."

Like many entrepreneurs, the Dasaris are offering a solution to a problem they've experienced themselves.

"There wasn't a consolidated kind of place to find every single word that could come up with the National Spelling Bee. And so you're kind of, like, picking and choosing words from all over the place. … That was really time-consuming."

The first version of SpellPundit was actually an Excel spreadsheet that their mom, a computer science engineer, compiled.

The Dasari siblings aren't the first to get into the spelling prep business. But they are part of a recent trend of competitors monetizing their skills as soon as their bee careers end — in their teens.

"So the coaching is something that has been around for decades, but it's primarily been run by adults. … But lately, what we've seen is as soon as spellers age out of competition themselves … they start to coach."

Anthropologist Shalini Shankar says the surge of teen coaches is a natural consequence of a fast-evolving bee. Recent ex-spellers can advise from firsthand experience.

Certain coaches, courses and study guides can be prohibitively expensive for some, though — up to $200 an hour through networks like Brainsy or close to $300 with Hexco. Still, nearly every speller these days is paying for coaching or word lists, or both, because they see it as necessary to compete.

Shobha says she and her entrepreneurial peers are not looking to exploit the demand for resources. SpellPundit's modules are priced between $120 and $600 for annual subscriptions. While the company is for-profit, the Dasaris donate 25-30% of their earnings. That goes to the North South Foundation's college scholarships for underprivileged kids in India. In 2018, it was $15,000 of their $60,000 revenue. In 2019, it's $17,000.

"My dad grew up in a small village in India and wouldn't have been able to go to the colleges he did go to without funding. … That really appeals to our family, because we wouldn't be here if my dad hadn't gotten that support."

Even with the success of the Dasari family's sophisticated program, Shobha still thinks there are ways to challenge the spellers. She recommends the bee avoid words with commonly studied roots like Latin, Greek, French and German.

Shobha thinks it might even be possible to declare just one champion.

"It will require going into the dark recesses of the unabridged dictionary."