These Were The Best, Most Memorable Proposals Of 2015 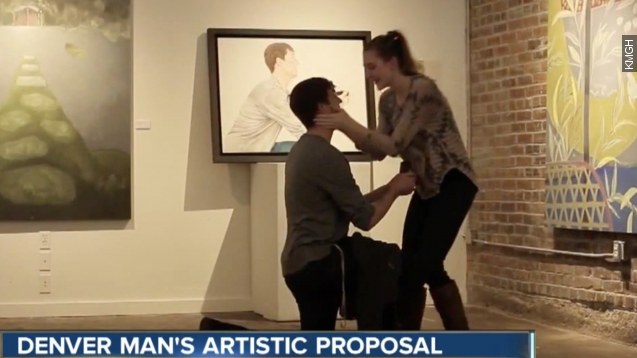 From getting down on one knee in a Whole Foods to a phenomenal preschool assist, these are the best, most memorable proposals of 2015.

Everyone wants a proposal to remember — and these five from 2015 hit the nail on the head. Even if some were memorable for, let's say, unique reasons.

At No. 5, a proposal at an unlikely place — a grocery store.

Aaron Califf proposed to his girlfriend while dressed as an employee at Whole Foods in Florida.

"His girlfriend of seven years, Jessica Shiekman, had planned to go mall shopping with family but picked up an engagement ring in the produce aisle instead," a WSVN anchor said.

Aaron picked Whole Foods because Jessica called it her happy place. That, and he wanted it to be a surprise.

At No. 4, an unusual prop to help a guy out with his proposal during a walk through an art exhibit.

"He turned his marriage proposal into a bit of a work of art. ... When Alex and his girlfriend got to the end of the exhibit, she saw the surprise proposal painting," a KMGH anchor said.

As Newsy's partners at KMGH report, a Denver artist painted this portrait of Alex Roelfson down on one knee, and Alex's girlfriend said yes.

For No. 3, a Missouri bride who helped out with her cousin's proposal — during her own wedding!

Bride Chelsea Pulse decided her wedding bouquet wouldn't decide someone's fate — she would. Instead of tossing the bouquet, you can see in this vid by Gold Hairpin Films that she handed it to her first cousin, Megan.

Chelsea told us on Facebook her wedding date of April 25 marked eight years since her cousin Megan first started dating her now-fiance.

Michael Miles and Triston Lowery welcomed a baby girl into the world, and then the new Mississippi father proposed.

He put a onesie on his newborn daughter that read, "Will You Marry My Daddy?"

"I wanted Lynleigh to be a part of it," Michael said.

"Lowery says she was amazed," a WDAM reporter said.

"I was shocked, I had just had a baby, so my hormones were already going crazy," Triston said.

And our top pick: a proposal 30 years in the making. See these two cuties? They were preschool sweethearts. But they didn't know that when they reconnected.

Amy Giberson and Justin Pounders met on Match.com, went on a date, hit it off — and then, a confession. Justin told Amy he had a crush on a girl at his preschool named Amy.

Justin's mother dug out the old photo, and it was Amy, three decades ago.

He made things official on ABC's "The View" with some help from his old preschool.

"Will you marry me?" the children ask.

"Amy, I love you so much; you mean the world to me. Will you marry me?" Justin asked on ABC.

And you can keep up with their adventures and wedding plans on their Instagram, fittingly named preschool_sweethearts.