This $117K Endangered Tuna Will Make Some Expensive Sushi 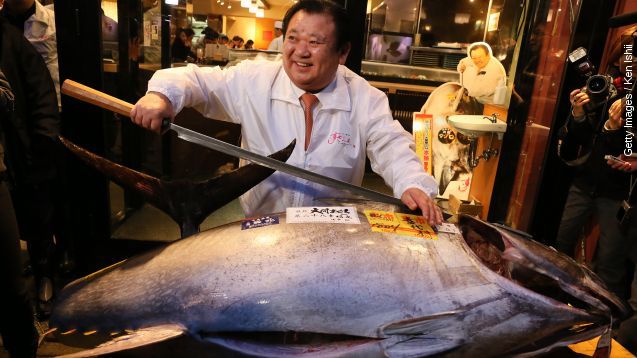 The owner of a popular chain of sushi restaurants paid $117,000 for a bluefin tuna, a species that's dwindled in numbers due to overfishing.

After 80 years of hustling and bustling, the world's largest fish market is moving its business to a new, modern complex in Tokyo Bay.

But before the famous Tsukiji market closes its doors, it had its last New Year's auction and sold a really big tuna for an even bigger price.

A 440-pound Pacific bluefin tuna sold for $117,000, which equals about $265 per pound. The new owner of this overpriced fish is Kiyoshi Kimura, who runs a popular chain of sushi restaurants and has been known to splurge at the first auction of the new year.

Kimura bought a similar sized tuna in 2013 for 15 times what he paid this year — $1.8 million for a 490-pound fish. According to The Washington Post, Kimura "got into a vicious bidding war with the owner of [a] rival sushi chain."

But the popularity of bluefin tuna has left the species on the brink of extinction. According to a conservation organization, the number of Pacific bluefin tuna has dropped nearly 96 percent, and rising auction prices aren't helping.

Environmentalists are calling for Japan, the largest consumer of bluefin tuna in the world, to implement science-based catch limits on both sides of the Pacific Ocean.