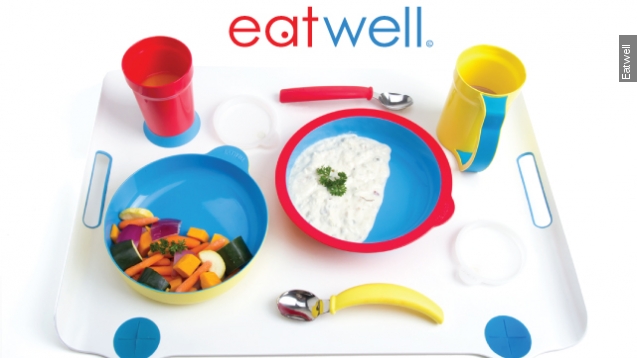 This dining set was created by a San Francisco woman. While it might look similar to the dishes and silverware you use every day, the set was designed for people who have cognitive issues, like Alzheimer's disease.

The Alzheimer’s Association says patients may have more trouble eating food as the disease progresses.

The designer, Sha Yao, was a caregiver for her late grandmother who had Alzheimer’s.

On her website, Yao says she wanted to create a dining set that not only benefits the patients, but also the people caring for them.

“The slanted bottom of the bowl allows food to collect on one side. While spoons in the Eatwell set are specially designed to match the curvature of the bowl, making scraping food significantly easier,” Yao says in a promotional video.

The bright colors can also help highlight the food on the plate.

And here's another feature: Suction cups are on the bottom of the Eatwell plates, bowls and cups so they won't fall over — something the Mayo Clinic says can make mealtimes easier for Alzheimer’s patients.

Out of 52 submissions, Yao’s dining set won the Stanford Center on Longevity Design Challenge in 2014.

Since then, Yao has raised over $91,000 on IndieGoGo to continue producing her product, which you can purchase now on the Eatwell website.