This Is What Happens When China Bans U.S. Shellfish Imports 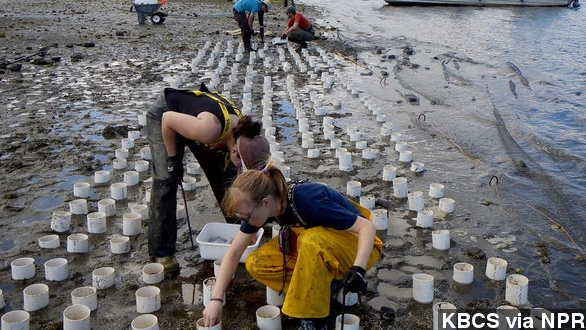 China banned imports of shellfish from the Pacific Northwest, and states like Washington say it's taking a huge economic toll.

Turns out when China stops taking American shellfish, it can cost a state like Washington $600,000 a week.

"Lots of jobs, I mean, all of the wild harvest, all the divers, the tribal divers and the commercial divers as well as the farmed shellfish industry is all being impacted by it." (Via KGW-TV)

See, earlier this month, China banned imports of shellfish from northern California to Alaska. That was after one clam tested for high levels of inorganic arsenic. (Via KOMO)

Shellfish like this — the long-necked clam known as the geoduck — can sell for as much as $150 a pound in China, according to NPR. (Via NWCN)

Some 90 percent of the geoduck from Washington ends up sold to China or Hong Kong. So when it comes to members of the Suquamish Tribe near Seattle in particular, the economic impact of China's ban is huge. One told NPR:

"There's about 25 divers in our tribe, and that's 25 families that really need to pay their mortgage or pay their rent. For me, I can't keep going on like this for very long."

Then in a letter from the National Oceanic and Atmospheric Administration, U.S. officials assured China shellfish should all be safe for consumption now, and asked that exports be allowed to resume. (Via KIMA)

No indication China is ready to drop the ban yet. And in the meantime, Beijing hasn't revealed many details about how it tested that bad clam in the first place.

"Washington state found the shellfish safe. It has some people wondering if China is retaliating for an incident when the U.S. flew bombers over an island China had claimed as its own territory." (Via KIRO)

On top of that, it was really just two samples of geoduck total that China says tested for high levels of arsenic or another toxin. So banning all Pacific Northwest shellfish was a move many U.S. observers called drastic and possibly political.

About a decade ago, China banned beef imports from the U.S. over mad cow disease concerns. That ban is still in place.