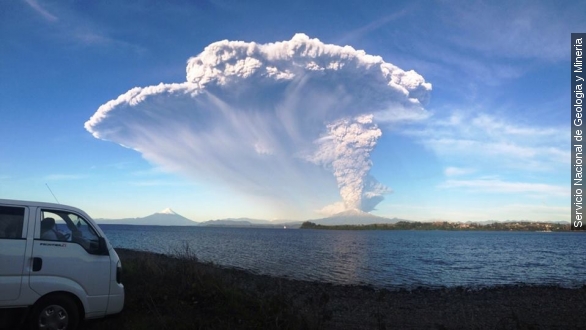 Red alerts were issued for the nearby towns of Puerto Montt and Puerto Varas and people within 12 miles of the crater were evacuated. (Video via 24 Horas.cl)

Chile is located in an area of the Pacific Ocean known as the Ring of Fire, which has 75% of the world's active volcanoes.

Despite this being considered one of Chile's more dangerous volcanoes, the last time it erupted was more than 40 years ago in 1972.

And the last major eruption was in 1961, according to the Global Volcanism Program run by the Smithsonian Institution.

The country was recently rocked by another volcanic eruption in March, less than 150 miles away, but the BBC reported that one stopped spewing ash and lava about 20 minutes after erupting.

Currently, there have been no reports of missing persons or deaths with this most recent eruption.