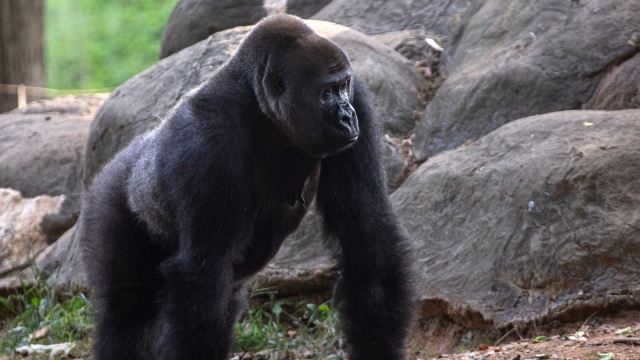 The International Union for Conservation of Nature lists over 54,800 species of plants and animals as either threatened or endangered.

The African forest elephant, the eastern lowland gorilla and the Sunda tiger.  All three animals, seemingly unrelated, all have one thing in common. Each is critically endangered, according to the World Wildlife Fund. But these are just a small fraction of the thousands of animals, and even plants, facing extinction.

The International Union for Conservation of Nature lists over 54,800 species of plants and animals as either threatened or endangered.  While efforts are underway to try and save as many as possible, a number of factors are to blame for decreasing animal and plant populations. The two major ones are habitat destruction and poaching.

African elephants are trying to survive amid both habitat destruction and poaching and trafficking dangers related to their highly valuable ivory tusks.

"For example, 2007 to 2016, some 10,000 African elephants were poached just for ivory in that time," according to Crawford Allan, wildlife crime lead at WWF-US.

"Even though there are some signs of recovery, the trade and demand for ivory is still taking place," he said.

Despite decades-long anti-poaching efforts, animals and animal parts on the black market are worth up to $20 billion a year, Allan estimated.

And the elephants aren't alone.  Tigers have long been a target of poachers, who take their skin for fashion and even their bones, which are believed to be a cure-all in the practice of traditional medicine in some cultures.  But a big concern right now for wildlife protectors is the scaly anteater, or pangolin. The WWF lists pangolins as the most trafficked mammal in the world.

Eight species are found across Africa and Asia, and despite protections, an estimated one million  have been poached in the past 10 years for their meat and scales. The leather has even been used for boots and bags in the United States and the pandemic has made the illegal trafficking even worse, pushing the sale of illegal animal parts online.

Posts advertising illegal, poached goods are showing up on social media.  And what may appear to be just a regular purse, could turn out to be made with the leather from one of these endangered animals. The WWF has partnered with dozens of social media platforms to block these types of ads, and instead replace them with warnings when people search for animal products.  The bottom line, though, is the more people need to ask where a product is coming from and how it was made "We see this this online trade has really been driven since the start of the COVID pandemic, with more and more of the black market emerging to be digital and trying to find solutions there," Allan explained. "And we realized that law enforcement really can't tackle this huge problem."

Law enforcement is only a small piece of the tricky puzzle of how to stop poachers. Thermal imaging is being used to capture criminals using the cover of night to catch and kill wildlife. And new technology helps track animals, sending alerts if they're ever in danger.  But none of it means a thing when getting it to the courts is another hurdle.

Allan says prosecuting these crimes can be very difficult.

"Quite often wildlife tends to be a lower priority than most of the crimes, and people aren't really as familiar with wildlife cases or wildlife laws."

The strongest tool the world has to protect the elephants, tigers and even the pangolin, is encouraging people to speak out and learn about the problem in order to help stop it.

There are a number of ways to learn more about endangered species and the illegal practices hurting their populations.  The World Wildlife Fund, the Jane Goodall Institute and the Wildlife Conservation Society are just a few of the groups working to save the world's endangered wildlife.