Thousands Of Live-Event Workers In The U.S. Now Unemployed 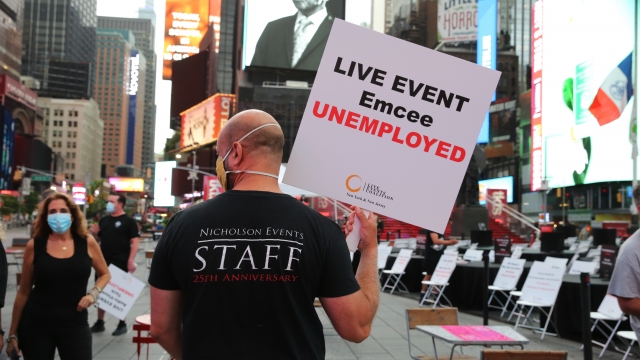 The Live Events Coalition is lobbying for federal financial support for the millions of live-event workers around the U.S.

Bonnie Fimiano: "We're here in front of Sen. Marco Rubio's office today to send a clear and send a strong message to Congress, who's deciding our future right now."

Live-event workers — including planners, caterers, suppliers and crews — typically work behind the scenes. But amid the pandemic, while live events are stalled, they're taking the spotlight for themselves and advocating for federal financial support.

Nancy Shaffer: "When your livelihood has basically been stopped, it's not even a slow roll. It was a door slamming our face."

That's Nancy Shaffer, president of the newly formed Live Events Coalition, a group that advocates for the 12 million live-event workers around the country.

Shaffer: "We determined that approximately 66 percent of all those involved in our industry have either had a reduction in pay, or it's been slightly reduced, or it's gone altogether."

Newsy previously reported that almost half of the industry is unemployed, and new information from the Live Events Coalition finds that "many companies have laid off or furloughed ninety to ninety-five percent of their teams." In a survey of almost 2,500 industry workers, more than 80 percent said they applied for unemployment insurance.

To better understand the economic impact of live events in the U.S., consider that trade shows and conferences make up a $17 billion industry, concerts make up a $35 billion industry and … weddings? Yeah, they more than double that with a staggering market size of $74 billion.

Shaffer: "Believe me, this is an industry of Type-A individuals. The fact that we can't do anything is kind of a true nightmare."

To help the industry stay afloat, the coalition is advocating for updated and extended Pandemic Unemployment Assistance, paycheck protection, and economic injury disaster loans. In cities around the world, the group is also organizing "Empty Events" to raise awareness for live-event workers and small businesses.

Shaffer: "We want to survive until we get to the other end so that we can do what we all want to do."