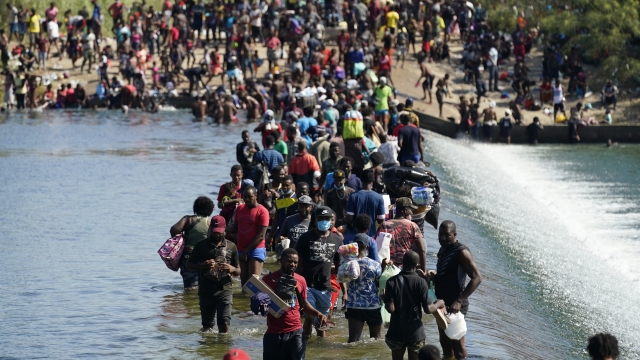 Over 9,000 of the mostly Haitian migrants are stranded near the town of Del Rio as they wait to be processed by immigration officials.

Thousands of mostly Haitian migrants have assembled under and around a bridge in a small Texas border town, presenting the Biden administration with a new and chaotic challenge Friday as it tries to manage large numbers of asylum-seekers who have been reaching U.S. soil.

Haitians crossed the Rio Grande freely and in a steady stream, going back and forth between the U.S. and Mexico through knee-deep water with some parents carrying small children on their shoulders. Unable to buy supplies in the U.S., they returned briefly to Mexico for food and cardboard to settle, temporarily at least, under or near the bridge in Del Rio, a city of 35,000 that has been severely strained by migrant flows in recent months.

The vast majority of the estimated 12,000 migrants at the bridge on Friday were Haitian, said Val Verde County Judge Lewis Owens, who is the county's top elected official and whose jurisdiction includes Del Rio. Some families have been under the bridge for as long as six days.

The judge ordered the Biden administration to stop expelling migrant families under a public health policy invoked under the Trump administration.

Some migrants built cave-like shelters within the reeds along the river, Owens said. Trash piles were 10 feet wide and at least two women have given birth, including one who tested positive for COVID-19 after being taken to a hospital, he said.

It is unclear how such a large number amassed so quickly, though many Haitians have been assembling in camps on the Mexican side of the border, including in Tijuana, across from San Diego, to wait while deciding whether to attempt to enter the United States.

U.S. authorities are being severely tested after President Joe Biden quickly dismantled Trump administration policies that Biden considered cruel or inhumane, most notably one requiring asylum-seekers to remain in Mexico while waiting for U.S. immigration court hearings. Such migrants have been exposed to extreme violence in Mexico and faced extraordinary difficulty in finding attorneys.

The U.S Supreme Court last month let stand a judge's order to reinstate the policy, though Mexico must agree to its terms. The Justice Department said in a court filing this week that discussions with the Mexican government were ongoing.

Mexico has agreed to take expelled families only from Mexico, Guatemala, Honduras and El Salvador, creating an opening for Haitians and other nationalities because the U.S. lacks the resources to detain and quickly expel them on flights to their homelands.

In August, U.S. authorities stopped migrants nearly 209,000 times at the border, which was close to a 20-year high even though many of the stops involved repeat crossers because there are no legal consequences for being expelled.