Tens Of Thousands Of Protesters Call For Australian PM To Resign 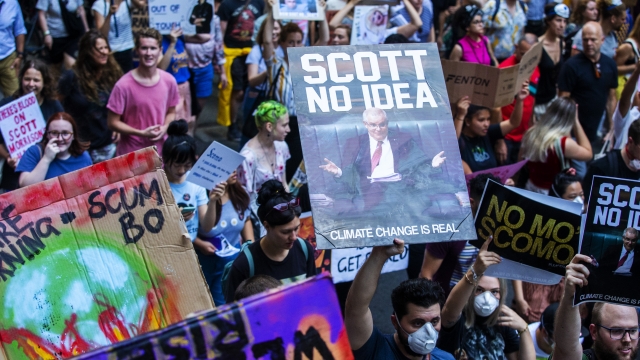 Authorities have expressed frustration that the protests are distracting emergency services from battling fires.

Tens of thousands of protesters called for Australia's prime minister to resign Friday over his climate policies.

At rallies across the country, activists urged Prime Minister Scott Morrison and the government to do more to combat climate change and stop the bushfires that have engulfed the nation. Morrison has drawn criticism for publicly rejecting climate change as a factor in the fires.

The group that organized the protests says over 50,000 people marched in Sydney alone. But authorities have criticized the timing of the protests as the country's emergency services battle fires. Victoria Acting Assistant Commissioner Tim Hanson said Tuesday that he believes the conversation is important, but he called the gathering a "resource drain" on police, who are needed in fire response.

Hansen said, "We are frustrated by this protest timing and we are also frustrated by the lack of flexibility by the protest organizers to work with us in trying to find a more suitable time."

An estimated 10 million hectares have burned across the country so far, and meteorologists say rising temperatures and lightning strikes may spark even more fires.