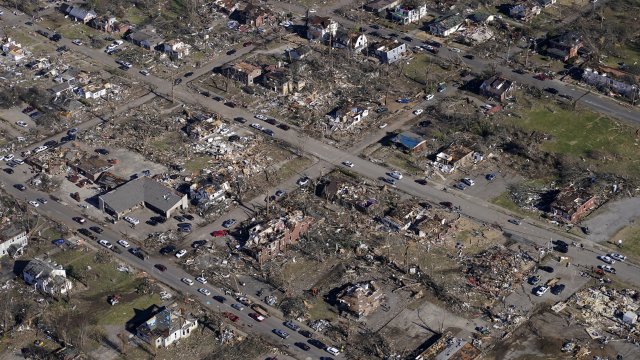 Authorities are still tallying the devastation from Friday night's storms, though they believe the death toll will be lower than initially feared.

Residents of a Kentucky town devastated by a tornado could be without heat, water and electricity in chilly temperatures for a long time, the mayor warned Monday, as officials struggled to restore services after a swarm of twisters leveled neighborhoods and killed dozens of people in five states.

Authorities are still tallying the devastation from Friday night's storms, though they believe the death toll will be lower than initially feared since it appeared many more people escaped a candle factory in Mayfield, Kentucky, than first thought.

"This is a tough morning ... but it's OK, we're still going to be all right," Mayfield Mayor Kathy Stewart O'Nan said on "CBS Mornings."

But those who survived faced highs in the 50s and a low below freezing Monday without any utilities.

"Our infrastructure is so damaged. We have no running water. Our water tower was lost. Our wastewater management was lost, and there's no natural gas to the city. So we have nothing to rely on there," she told CBS. "So that is purely survival at this point for so many of our people."

Across the state, about 26,000 homes and businesses were without electricity, according to poweroutage.us, including nearly all of those in Mayfield.

Kentucky was the worst-hit by far in the cluster of twisters across several states, remarkable because they came at a time of year when cold weather normally limits tornadoes. At least 64 people died in the state, Gov. Andy Beshear said Monday. There were at least another 14 deaths in Illinois, Tennessee, Arkansas and Missouri.

Authorities are still trying to pin down the full death toll, and the storms made door-to-door searches impossible in some places. "There are no doors," said Beshear.

Over the weekend, Beshear had said that the state's toll could exceed 100 — but he scaled that back after it appeared fewer people died in the candle factory than first thought.

Initially as many as 70 people were feared dead in the factory, but the company said Sunday that eight deaths were confirmed and eight remained missing, while more than 90 others had been located.

"Many of the employees were gathered in the tornado shelter and after the storm was over they left the plant and went to their homes," said Bob Ferguson, a spokesman for the company. "With the power out and no landline they were hard to reach initially. We’re hoping to find more of those eight unaccounted as we try their home residences."

Debris from destroyed buildings and shredded trees covered the ground in Mayfield, a city of about 10,000 in western Kentucky. Twisted sheet metal, downed power lines and wrecked vehicles lined the streets. Windows were blown out and roofs torn off the buildings that were still standing.

Firefighters in the town had to rip the doors off the fire station to get vehicles out, according to Fire Chief Jeremy Creason on "CBS Mornings."

"Words cannot describe the bravery, the selflessness that they’ve exhibited,” he said of his employees. “We had to try and navigate through all the debris up and down our streets. We were responding with ambulances with three and four flat tires.”

Downtown churches were heavily damaged or destroyed. The Rev. Joey Reed of First United Methodist Church told CBS that he was able to hold a worship service Sunday with a colleague at a different church after the tornado ripped through his. He said he and his wife were in the church as a wall collapsed and the ceiling caved in.

"Thanks be to God that the parts of the building that came down didn’t come down on us," he said.

At the candle factory, night-shift workers were in the middle of the holiday rush when the word went out to seek shelter.

For Autumn Kirks, that meant tossing aside wax and fragrance buckets to make an improvised safe place. She glanced away from her boyfriend, Lannis Ward, who was about 10 feet away at the time.

Suddenly, she saw sky and lightning where a wall had been, and Ward had vanished.

"I remember taking my eyes off of him for a second, and then he was gone," Kirks said.

Later in the day, she got the terrible news — that Ward had been killed in the storm.

Four twisters hit Kentucky in all, including one with an extraordinarily long path of about 200 miles (322 kilometers), authorities said.

In addition to the deaths in Kentucky, the tornadoes also killed at least six people in Illinois, where an Amazon distribution center in Edwardsville was hit; four in Tennessee; two in Arkansas, where a nursing home was destroyed and the governor said workers shielded residents with their own bodies; and two in Missouri.

Pope Francis expressed his sadness over the "devastating impact" of the tornadoes. In a telegram sent Monday by Vatican secretary of state, Cardinal Pietro Parolin, the pope offered prayers for those who died, “comfort to those who mourn their loss and strength to all those affected by this immense tragedy."

At a Sunday service held in a church parking lot surrounded by rubble in Mayfield, residents came together to pray for those lost.

"Our little town will never be the same, but we're resilient," Laura McClendon said. "We'll get there, but it's going to take a long time."