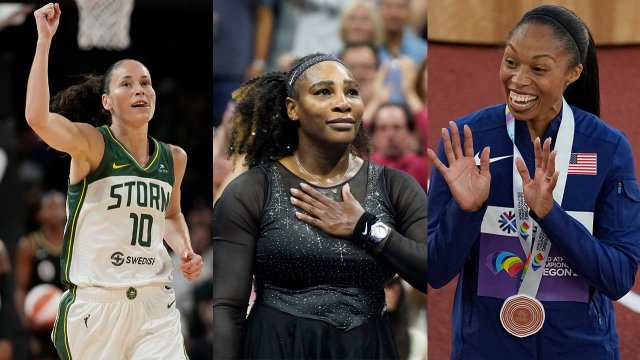 Serena Williams, Sue Bird and Allyson Felix are retiring from their respective sports and moving on to other ventures.

It's the end of an era for women's sports, as three icons retire from their respective games.

"Something that you can't ignore is all the high-profile women and female athletes that are some of the greatest in the world who are all retiring at the same time," said Melanie Anzidei, a reporter with NorthJersey.com.

"Women, people of color are always put down because of the way they look or some people's ideas think they can't do as much, so putting Serena as a role model and all she's done is really good," said Isalia Lebron, a 13-year-old tennis player.

"My granddaughter sees Serena, she's like, 'Nana I can do that because Serena did it. If Serena said you could do it, anybody can do it,'" said Tiffany Martinez, a fan from Columbus, Ohio. "So, we're here. After 33 years of being a waitress and never, ever having a weekend off, I took a whole weekend off this week just to come see her because she's done that much for me."

Williams, who won the Australian Open in 2017 while two months pregnant, says she is "ready for what's next," turning her attention now to having another child and expanding her business interests. This includes her investment firm, Serena Ventures, which aims to support women and minority-owned businesses.

Meanwhile, the WNBA is saying goodbye to arguably the most accomplished player in the game, Sue Bird. She helped lead the University of Connecticut to two NCAA titles and played on five gold medal-winning Olympic teams for the U.S.

Viewership for WNBA games rose 16% compared to last year, along with increasing social media and website traffic for the league.

As a pro, she helped lead the Seattle Storm to four WNBA championships over 19 seasons in the league. Off the court, she has emerged as a powerful advocate for LGBTQ rights and the Black Lives Matter movement.

"Not only is she one of the greatest in the WNBA, she's also unique because she is stepping outside of just basketball," Anzidei said. "She's choosing to invest in a team. In Gotham FC, she's choosing to become a minority investor in the club, which is interesting because she announced that while she was still active in the WNBA."

Then, with 11 Olympic medals, track superstar Allyson Felix is hanging up her spikes. Over the course of her career, Felix pushed the limits of her sport while breaking down barriers for women off the track.

"I had kind of heard the statistics of Black women being more at risk for complications, but being a professional athlete, it just.... I never imagined myself in this situation," Felix said. "At 32 weeks, I was diagnosed with severe preeclampsia."

She has advocated relentlessly for women's issues like job and pay protections for athletes who become mothers, and for maternal health care.

"I really want women just to be aware, to know if they are at risk, to have a plan in place and not be intimidated in doctor's offices," Felix said. "I know how important it is. I know how scared I was. I know how I didn't feel prepared or educated, and I don't want anyone else to feel that way."

"What's very unique about her is that for her, parenthood is probably the signature of one of the biggest footnotes of her entire athletic career," Anzidei said. "It has been that something that she's made a priority, and that's going to change sport in tremendous ways for athletes."

While the three athletes have crossed the finish line in their respective sports, they're not done winning yet outside the game.