Three Of The 'San Antonio Four' Released From Prison 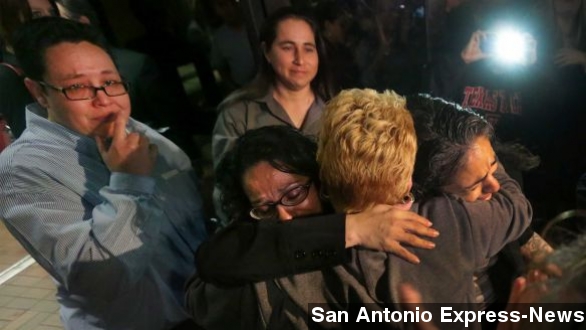 Three of four women known as the San Antonio Four were released from prison decades after they were convicted for sexually assaulting two young girls.

"Elizabeth Ramirez, Kristie Mayhugh and Cassandra Rivera were released last night. That was after a judge decided to recommend that an appeals court vacate their 1998 convictions as tainted by faulty witness testimony." (Via KXXV)

Their friend and co-defendant, Anna Vasquez, joined the three women in court for the decision. Vasquez was also convicted in the case but set free on parole more than a year ago. (Via KENS)

"I'm just happy to be home. I thank God I'm with my family again." "You met your grandchild for the first time, how did that feel?" "I can't even describe it, ma'am." (Via WOAI)

Now, the women haven't been formally exonerated, but prosecutors say they don't intend to retry them because expert medical testimony from the 1997 trial wouldn't stand up in court now.

Back in 1998, Ramirez, Mayhugh, Rivera and Vasquez were convicted of assaulting two of Ramirez's nieces in 1994. The young girls testified that the four held them down, attacked them and threatened to kill them. (Via Al Jazeera)

An expert's testimony that a vaginal injury sustained by one of the girls could have been caused by an assault was one of the main reasons for the conviction. The expert also testified that the physical injuries the girls sustained were inflicted on them as part of "Satanic rituals" that she said were "prevalent among some lesbians."

Ramirez was given a 37-year prison sentence, and the other three were ordered to serve 15 years behind bars. (Via KABB)

But more than ten years into the women's prison sentences, a group of attorneys associated with the nonprofit Innocence Project of Texas decided to look into the case. They filed petitions with the state appeals court on their behalf last month.

One of those petitions reportedly showed that the evidence presented in trial years ago about the vaginal injury has since been proven wrong by "current findings in science." (Via Innocence Project of Texas)

The case will now make its way through the court system as their fight for formal exoneration begins. The process could take years, but the women will remain free until a decision is reached. (Via KEYE)