3 Races Will Decide Control Of The U.S. Senate 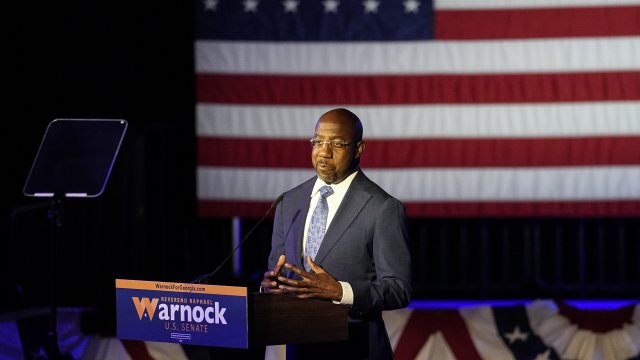 Election night ended without clear results in several races, including those that will determine which party controls the House and Senate.

Control of the U.S. Senate hangs on the outcome of races in three states.

In Georgia, the race between incumbent Democratic Sen. Raphael Warnock and Republican challenger Herschel Walker is headed to a runoff next month. Neither of them received more than 50% of the vote, though both candidates were confident on election night.

"We will hear from the people who have given me the great honor of my life, representing you in the United States Senate, and we will move forward together," Sen. Warnock said.

Mail ballots that arrived shortly before or on Election Day will be counted in the coming days.

Democrats And Republicans Still Battling Over Control Of Congress

As the final races play out, Americans are taking stock of the results we have so far and what it could mean for the future and democracy.

Kelly has focused on supporting abortion rights, protecting Social Security and lowering drug prices. Masters has made his endorsement by former President Donald Trump a central selling point of his campaign. He's expressed a hard line on immigration, including accusing Democrats — without evidence — of using immigrants to try "to change the demographics of our country."

Immigration is a key issue in Nevada, where the senate race has been close for weeks.

The debate has spurred young people to get involved.