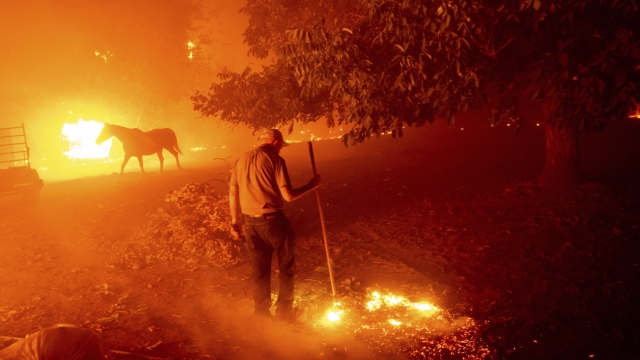 Cal Fire estimates more than 300,000 acres have burned amid a brutal heat wave and a rare summer thunderstorm that sparked at least 367 new fires.

California Gov. Gavin Newsom has declared a state of emergency as the state struggles to contain a swath of wildfires amid an intense heatwave.

Cal Fire said a rare summer thunderstorm sparked at least 367 new fires throughout the state and it's estimated more than 300,000 acres have been scorched so far.

Residents of the Vacaville area between Sacramento and San Francisco have been advised to evacuate as blazes began consuming homes outside the city of more than 100,000 people.

The state has also been experiencing electric blackouts since Friday, with lawmakers demanding answers from the agency that controls the state's power grid.

Gov. Newsom called for an investigation into why regulators were not adequately prepared for the heatwave.