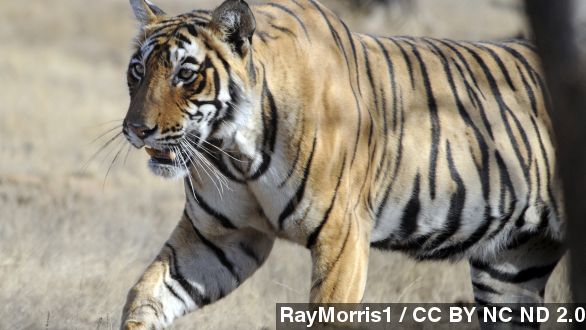 The tiger population in India, which is home to 70 percent of the world's tigers, continues to rise, even as global numbers continue to fall.

From a global population of around 100,000 of the biggest big cats in the wild, in 1900, tiger numbers have dropped to around 3,000, and tigers now inhabit just seven percent of their original range. (Video via International Fund for Animal Welfare, National Geographic)

In that context, positive signs for tiger populations are few and far between, but this week, India was the bearer of some welcomed good news.

India's top environment minister announced Tuesday authorities had determined the country's tiger population in 2014 was 2,226, up from just 1,706 in 2010. (Video via Newzstreet TV)

A press release noted that the increased number, which constitutes a 30 percent increase, was the result of streamlined conservation efforts, and the estimate was established using motion-sensitive camera traps. (Video via World Wide Fund for Nature India)

This is significant because India is home to an estimated 70 percent of the world's tiger population, and it continues an increasing trend, aided by Indira Gandhi's Project Tiger, established in 1973. (Video via Symbiosis Institute of Design)

Project Tiger has helped the country increase its tiger reserves to 47, covering just under 20,000 square miles or about one percent of the country's territory.

The global decline in wild tigers is down to a combination of habitat loss and poaching, as human populations increase and the demand for tiger products, particularly in China, increases as well. (Video via VICE)

Tigers used to live across China, but now, their bones, genitals and eyes are used in traditional remedies, as well as luxury products like tiger wine.

In India, the government's efforts to boost Tiger numbers have included reducing human-tiger contact and trying to prevent encroachment on tiger habitats.