This Is 'A Low Point' In US-Russian Relations 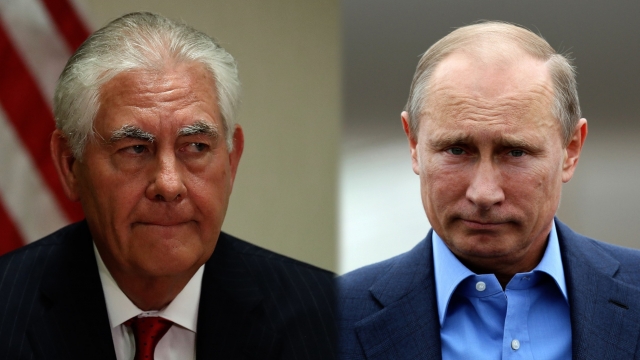 Secretary of State Rex Tillerson said he made that comment to Russian President Vladimir Putin during his meeting with him Wednesday.

Secretary of State Rex Tillerson said he had a "productive" and frank two-hour meeting on Wednesday with Russian President Vladimir Putin and his foreign minister, Sergey Lavrov.

"I expressed the view that the current state of U.S.-Russia relations is at a low point ...," Tillerson said. "The world's two foremost nuclear powers cannot have this kind of relationship."

They covered a lot of ground — especially on the Syrian conflict.

"We both believe in a unified and stable Syria," Tillerson said. "And we agree we want to deny a safe haven for terrorists who want to attack both of our countries."

But the agreement pretty much stops there.

Tillerson again said the U.S. has "conclusive" evidence Syrian President Bashar al-Assad's regime planned and carried out a chemical attack on its civilians last week. Lavrov told the press that there needs to be "an objective investigation."

"The principle of 'innocent until proven guilty' has to be respected," Lavrov said.

Chemical Agents Aren't The Only Banned Weapons Being Used In Syria

Although the chemical attack in northwest Syria was illegal under international law, other banned weapons have been used in the Syrian conflict.

Tillerson said, "The reign of the Assad family is coming to an end." He also said war-crime charges could be possible "the longer time goes by."

"A successful ouster of a dictator is for me very hard to remember," Lavrov said.

The Russian foreign minister argued overthrowing a dictator can make conditions worse. He cited the ouster of Saddam Hussein in Iraq and Moammar Gadhafi in Libya as examples.

Tillerson said last week the Russians were "complicit or simply incompetent." But he said Wednesday the U.S. doesn't have "firm information" to show that Russian forces were involved in the gas attack.

Later Wednesday, Russia blocked the U.N. Security Council's draft resolution condemning Syria and calling for it to comply with an investigation.

Tillerson and Lavrov also "briefly" discussed Russian attempts to meddle in the U.S. presidential election. But it appears they didn't discuss additional sanctions — until they were in front of the press.

"It's one that we know is serious enough to attract additional sanctions. And so we are mindful of the seriousness of that particular interference in our elections, and I'm sure that Russia is mindful of it as well," Tillerson said.