Tillerson Laughs Off Reports Of His Exit 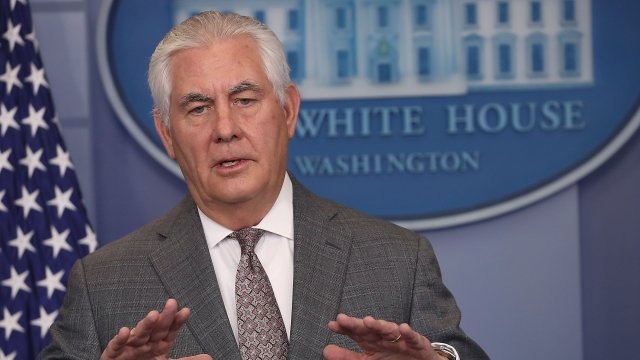 Secretary of State Rex Tillerson doesn't seem to be sweating the reports of his imminent ouster.

When questioned about those reports, Tillerson said: "It's laughable. Laughable."

The New York Times first reported that the White House was drafting a plan to force Tillerson out of the U.S. State Department and replace him with current CIA Director Mike Pompeo.

The State Department May Give Employees $25,000 To Quit Or Retire

The move seems to be in line with Secretary of State Rex Tillerson's focus on streamlining the department.

But President Trump later attacked that report on Twitter, insisting that "while we disagree on certain subjects ... we work well together."

Tillerson most recently had to bat down rumors about his resignation in October, following a report that he had privately questioned Trump's intelligence.