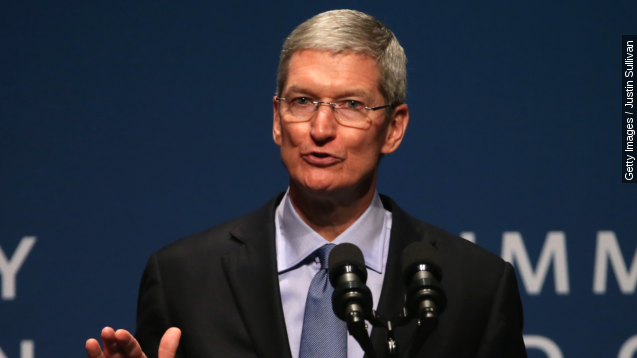 Tim Cook sought to distance Apple from the data-mining and advertising practices of other Silicon Valley companies.

Some of his remarks were apparent attempts to set Apple apart from other industry heavyweights, which he never named outright but are believed to be the Facebooks and Googles of Silicon Valley. (Video via Google)

He said these companies grow "by lulling their customers into complacency about their personal information" and then monetizing it. "We think that's wrong. And it's not the kind of company that Apple wants to be."

Cook cautioned against free online services, saying, "We don't think they're worth having your email, your search history and now even your family photos data mined and sold off for god-knows-what advertising purpose."

And he directed some of his comments toward government stances on information security and the chilling effect it could have on constitutional protections. He pointed out even if the U.S. government gets around encryption, criminals will still use it. (Video via the Electronic Frontier Foundation)

"Weakening encryption, or taking it away, harms good people that are using it for the right reasons," he said.

It was one of Cook's more focused criticisms of today's privacy environment, but it wasn't his first. He spoke on user trust, encryption and security at the White House Summit on Cybersecurity and Consumer Protection earlier this year. (Video via The White House)

"Our business, Charlie, is based on selling these [iPhones]. Our business is not based on having information about you. You're not our product," Cook said.

Now, there is a degree of hypocrisy to Cook's speech, considering Apple enables these companies it's indirectly tearing down through its own app store.

But as TechCrunch notes, Apple does at least appear to be coming from more justifiable ground. Unlike Google and Facebook, Apple doesn't make the bulk of its money from advertising.

This video includes images from Getty Image and music by Kratos Himself / CC BY NC SA 3.0.