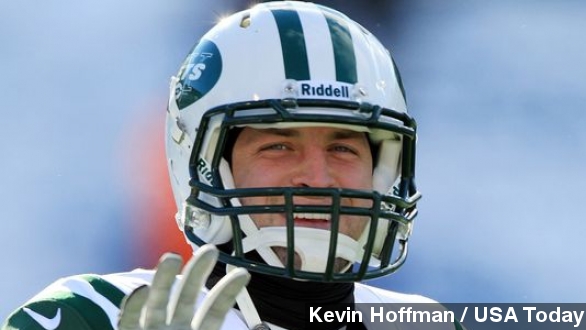 Tim Tebow and ESPN announced the signing of a multi-year deal Monday. Tebow will appear as an analyst on ESPN's new SEC Network.

If you couldn't get enough of Tim Tebow as a backup quarterback in the NFL, he's back — now as an analyst on ESPN.

ESPN announced the addition Monday. He'll join ESPN's SEC Network as an analyst for its show "SEC Nation" — a "College Gameday" type of program that travels to SEC games across the country.

Tebow said in a statement, ​"While I continue to pursue my dream of playing quarterback in the NFL, this is an amazing opportunity to be part of the unparalleled passion of college football and the SEC." (Via Wikimedia Commons / Jeffrey Beall)

So, it sounds like Tebow isn't giving up on his hope of being an NFL quarterback just yet.

Even though he's had quite a few turns in his football career. Tebow was traded by the Broncos, then released by the Jets, signed by the Patriots and later cut by them too before the regular season. (Via The Boston Globe)

​NFL Network's Ian Rapoport ​tweets, "Tim Tebow has an out-clause in his deal with the SEC Network if an @NFL [team] comes calling. Not over yet, folks." (Via Twitter / @RapSheet)

But, the transition to TV isn't a surprise for Florida Gators alum.

ESPN announced it's a multi-year deal with Tebow — though we don't know exactly how many years. He'll make his debut as an analyst for the BCS National Championship Game.

ESPN'S SEC Nation show will start Aug. 28 of next year with Texas A&M at South Carolina. Joe Tessitore will host. (Via Montgomery Advertiser)