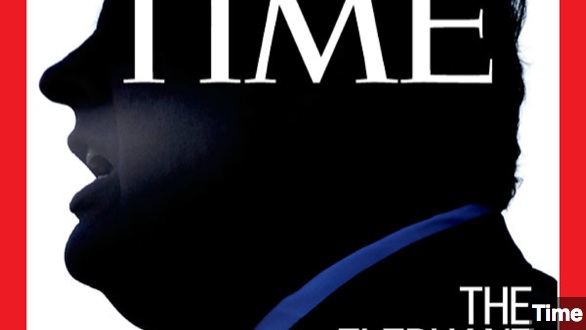 Time's latest cover features NJ Gov. Chris Christie with the words "the elephant in the room."

It features the profile of an open-mouthed New Jersey Governor Chris Christie — and the words "The Elephant in the Room."

'Cause it's an interesting choice of words considering — well — it's no secret the newly re-elected governor is a big boy. (Via C-SPAN)

A fact he's made light of (Via CBS)

But one he's also blasted his critics about. (Via ABC)

He's even sat down to talk about it with Oprah.

​CHRISTIE: "It hurt me a lot when I was younger but now I developed kind of a shell about it."

He's even made efforts to change, earlier this year getting lap band surgery.

In the cover story, Michael Scherer calls the governor "born to run" — and looks at his 2016 presidential prospects.

He was rumored in 2012 too, and both then and now his electability and fitness to lead has at least among Washington pundits been tied to his weight. (Via CNN)

As for whether Time intended to reference weight with the cover — pretty much anyone talking about it on Twitter made the connection.

The elephant is also the symbol of the Republican Party, so there's that, too.