Hot, Polluted Cities Can Show How Future Allergies Might Get Worse 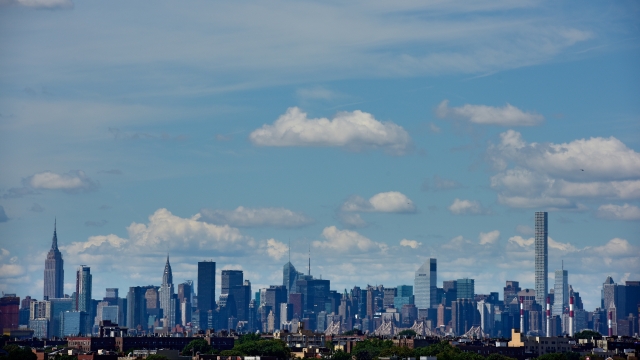 Today's cities show us what the future of pollen could look like as the climate changes.

Climate change is making seasonal allergies worse. And our cities, which already have higher temperatures and more CO2 than rural areas, can give scientists a sneak peek of what allergen levels might be like in the future.

"What we're seeing is that the urban environments are basically heatsinks," said Lewis Ziska, a research plant physiologist with the U.S. Department of Agriculture.

In 2003, Ziska and his colleagues published their finding that under the right circumstances, modern cities can be literal hotspots for ragweed pollen.

"The greenhouse effect, if you will, associated with warmer temperatures, more carbon dioxide, a longer growing season — are all endemic, or part of what happens with urban environments," Ziska said.

Ragweed loves these conditions. When Ziska and other researchers spread the same soil out between urban and rural areas, the ragweed in it grew faster, bloomed earlier and spread more pollen in the city than it did in the country.

And Ziska told Newsy these findings still hold up 16 years later. As global average emissions creep upward, cities can give us a preview of what a hotter, CO2-heavy climate might have in store.

"You have the normal control measure, which is usually reflected in the Keeling Curve," Ziska said. "At the moment, the average CO2 concentration in the city is higher than that. It has a very different ambient or background concentration than the Keeling Curve. As CO2 goes up, as temperatures go up, the cities will also be affected."

Scientists haven't determined how long this specific urban response will last or how severe it might get. But in the meantime, they're finding significant associations all the way up to the hemispheric scale: As temperatures get more extreme, there's often more pollen in the air, and often for a longer time. And when spring arrives early or late, allergic responses tend to get worse.

"All these basically add up to suggesting strongly that climate change is already happening, and it is, in fact, affecting seasonal allergies," Ziska said.

Some forecasts suggest that it will get worse, too. If heat and CO2 levels keep climbing, pollen counts might double by 2040.