'Tonight Show:' See All The 'GOT' Facts Kristen Wiig Made Up 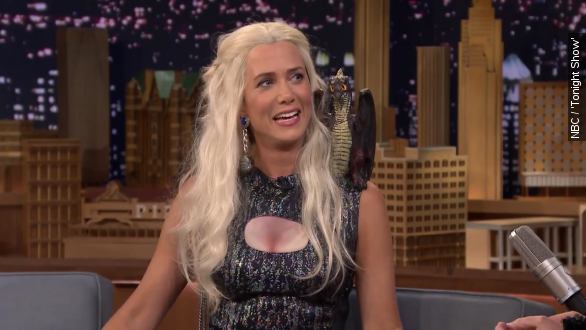 'Tonight Show:' See All The 'GOT' Facts Kristen Wiig Made Up

Okay, for those of you who don't watch HBO's hit series "Game of Thrones," here are some facts Kristen Wiig totally made up while impersonating the mother of dragons on the "Tonight Show" Wednesday. You're welcome.

First, "Remind me what is your real name?" asked Jimmy Fallon on the "Tonight Show."

Yeah, not quite, Kristen. The famous ousted queen's real name is Daenerys Targaryen, but if you want to get "technical" she is introduced as ...

"Daenerys Stormborn of House Targaryen, Queen of the Andals and First Men, Khaleesi of the Great Grass Sea, Breaker of Chains, and Mother of Dragons," said Missandei on "Game of Thrones."

Wooo, how would you even put that on a drivers license? Anyway ...

"Where are you originally from?" asked Jimmy.

"I live in the forest on a mountain, in a dome that I made out of dirt and sticks," answered Kristen.

Yeeesss and noooo. Yes, she was born in exile from her rightful kingdom, the Seven Kingdoms. But she lives in multiple cities throughout the series, establishing herself as a fearless leader and conqueror.

And if you've ever wondered what Daenerys favorite food is ...

And, of course, who could forget Daenerys's favorite article of clothing ...

We do have to say, that one might be true.

Because that's all she wears in the series. But let's face it, Emilia Clarke, the actress behind the mother of dragons, would probably be the best person to ask.

Clarke told The Telegraph she has many similarities with her onscreen character. "We both started out as naïve young girls with plenty to learn. I think we're similar in that we try not to make the same mistakes twice."

As for Daenerys's favorite thing, her mother's ring might also be a strong contender.

Clarke told TV Guide, "This ring is fundamentally the only thing Dany has had from day one season one, it's her mother's ring."

To find out some of Daenerys Targaryen's other favorite things, you can catch new episodes of "Game of Thrones" on HBO Sundays.

This video includes images from Getty Images, TheMountainGoat / CC by NC SA 3.0, and music from Kevin MacLeod / CC by 3.0.