Too Much Laughter At Jameis Winston Press Conference? 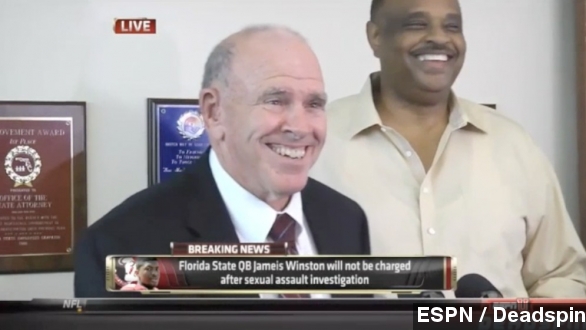 Florida officials had some laughs at a press conference announcing the state's decision not to pursue sexual assault charges against Jameis Winston.

Florida prosecutor Willie Meggs took the stand to announce the state's decision not to pursue charges. He announced Winston was off the hook, but had a few laughs along the way. (Via WTXL)

At one point during the "fun," you can hear a reporter shout, "Come on!" in an irritated tone as Meggs and other officials joke around.

ESPN's Samantha Ponder tweeted, "Anyone else uncomfortable with the amount of smiling/laughter in this press conference?" following that with "The press conference should be conducted as if both the woman & Winston were present."

And Missouri Sen. Claire McCaskill said, "As former prosecutor & advocate for rape victims I'm disgusted at the frivolity of Meggs press conference announcing no charges on Winston." (Via Twitter / @clairecmc)

A USA Today writer says: "There was laughter. There were jokes. There were smiles. The news conference of Florida state attorney Willie Meggs announcing that Jameis Winston was not going to be charged with sexual battery was an extremely light-hearted affair."

But this isn't the first time Florida officials handling this case have been criticized.

In November, authorities involved came under fire after the family of the accuser told the Tampa Bay Times one of the detectives told the accuser "to think long and hard before proceeding against [Winston] because she will be raked over the coals and her life will be made miserable."

Florida officials have not yet responded to this latest criticism.