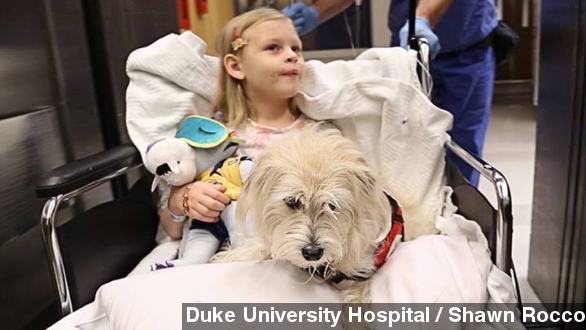 No. 3 is the incredible story of a blind man who fainted on a New York subway platform — and fell right in the path of an oncoming train. His faithful seeing-eye dog followed him onto the tracks. (Via WABC)

"So the dog jumped right in after him! A subway worker yelled at them to lie flat, and they did. The dog did, too, just in time as the train rolled above them!" (Via HLN)

Amazingly, both 61-year-old Cecil Williams and his dog, Orlando, survived the ordeal. One of the first things Williams said when firefighters got to him? He asked how his dog was doing. (Via WLNY)

Williams almost lost his dog because 10-year-old Orlando is nearing the age service dogs retire and insurance would no longer pay for him, but an online fundraising campaign raised enough money for the two to stay together. (Via New York Daily News, The Christian Science Monitor)

Seven-year-old Kaelyn Krawczyk, or "KK," as her family calls her, suffers from mast cell activation disorder. Her family's dog, JJ, can sense when a reaction is coming. (Via WBRE)

KK's mom says there have been times when he's picked up on something before the monitors have. Therefore, doctors allowed KK to have her best buddy in the operating room with her. (Via WGEM)

"Those reactions that JJ can smell coming can come at any time and could have been triggered by the anesthetic used by surgeons in the operating room, but with JJ standing guard, the procedure went off without a hitch." (Via ABC)

And finally for our No. 1 amazing dog story.

Last month in Massachusetts, John Miles was out for a walk with his 8-year-old beagle mix, Lucy, when the two were struck by a speeding car. (Via KNXV)

"Miles suffered two broken legs, a broken arm and several facial fractures, and even though Lucy was hurt, too, she went and found help for her owner." (Via WFXT)

With a broken leg, Lucy limped to a nearby dentist office and barked and barked to get someone's attention, then went back to Miles and stayed by his side until help arrived. (Via WACH)

The heroic dog had surgery on some torn ligaments in her leg but is expected to be OK. (Via Boston.com)

Thanks for watching Newsy's top three amazing animal stories of the week.