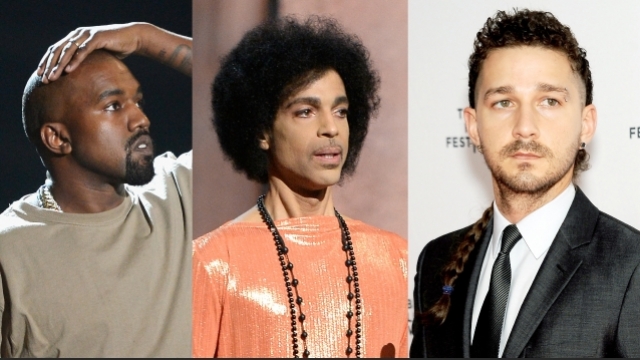 Celebrities are always making news, but this past week proved that some make headlines for the most bizarre reasons.

Every week, there's at least one celebrity making headlines for doing something rather ridiculous. It's part of the reason many people are obsessed with celebrity culture. But this week, there were too many big names being constantly talked about to ignore.

First up, people either seem to love him or hate him: Kanye West.

This past weekend, the rapper announced on Twitter that he's $53 million in debt. So naturally, he asked Mark Zuckerberg for a loan, tweeting, "Mark Zuckerberg invest 1 billion dollars into Kanye West ideas."

He followed that ask up with this tweet: "after realizing he is the greatest living artist and greatest artist of all time."

His tweets are a bit misleading, though. A source told E!, "That's the money he's spent over the past 13 years on fashion, his films and music videos. It's not debt per se."

If Zuckerberg doesn't come through, it seems there's another organization out there willing to help West out.

The Philadelphia Police Department practically offered West a job on Facebook, writing, "with a starting salary of $47,920, Officer West could be completely debt-free by the year 3122!"

Next up is Prince. Or more specifically his new passport photo.

A writer for Billboard said, "Of course, he looks incredibly blemish-free and perfect. ... The pursed lips tell all."

While an Essence magazine reporter wrote, "The bar has been set, friends. From now on a run to your local Walgreens won't do. Forget asking your friend, the amateur photographer, to take your [passport] photo."

And if you're wondering if Prince's photo is actually valid according to the federal government's passport photo requirements, it totally is.

So long as it's printed on matte or glossy photo paper, he's good to go, since he's already directly facing the camera, the photo was taken in the last six months, and he has a neutral facial expression. We're thinking Prince's Blue Steel look applies here.

We saved the most bizarre for last.

Shia LaBeouf spent 24 hours in a cramped elevator in Oxford, England, for art.

The 24 hours, which ended at 9 a.m. London time on Saturday or 4 a.m. New York time, was live-streamed on YouTube, and random people were allowed into the elevator with LaBeouf and his two musical collaborators throughout the day.

Now, LaBeouf actually got to cheat a bit. Besides being let out for bathroom breaks, he also was allowed to leave the elevator to host a talk at nearby Oxford University on Friday evening.