Top 3 Frog Stories Of The Week 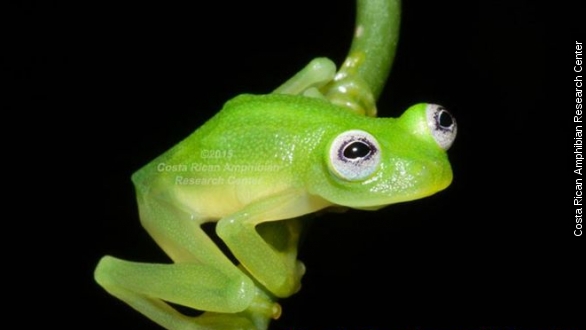 This week, plenty of stories concerning frogs made the news, including a certain new species that looks remarkably like our favorite green Muppet.

This week, slimy green things were taking over. You know ... frogs.

First, we'd be remiss if we didn’t talk about the most popular frog of the week: a new species of glassfrog discovered in Costa Rica.

It gets its name for its translucent belly that allows you to see its organs. The Costa Rican Amphibian Research Center says it's the first time a new type of glassfrog has been discovered in the country since 1973.

Now, the discovery of this new frog is great, but what really turned heads this week is that it sort of resembles a green Muppet we all know and love: Kermit the Frog.

The ladies of "The View" later spoke with Kermit about his newly discovered lookalike, and it seems like he’s taking the high road when it comes to another frog stealing his thunder.

"I want to assure them that the controversy about the legal action because of copyright infringement — ugh, that will not happen. They may all have to wear mouse ears during the summer," Kermit said.

Kermit did tell a Disney blog later that he probably has it easier than his doppleganger: "When you're transparent, folks really look right through you. It's almost like you’re invisible … which might come in handy around Miss Piggy. I take it back. I want to be transparent."

Next, bad weather can't stop a soccer match, but apparently an invasion of frogs can.

A soccer match between two teams in Zurich was abandoned after 41 minutes of play because the field was "swarming with thousands of frogs."

One of the clubs’ vice presidents told a local paper it’s not uncommon to see frogs making their way across the field, but they’d never seen so many at once before.

A rematch between the two teams has been scheduled for May 11. And hopefully security at that game will be more worried about catching any possible streakers than any possible frog invasions.

And finally, want to be able to understand frogs?

The University of South Dakota has got you covered. It's hosting a training session to teach people all about frogs and the different calls they make.

Like distress and warning calls, as well as release calls, which the University of Michigan says is made "when one male needs to tell another male to let go." The university explains that frog mating "can be a bit hectic."

This video includes images from Getty Images and music from Podington Bear / CC BY NC 3.0.