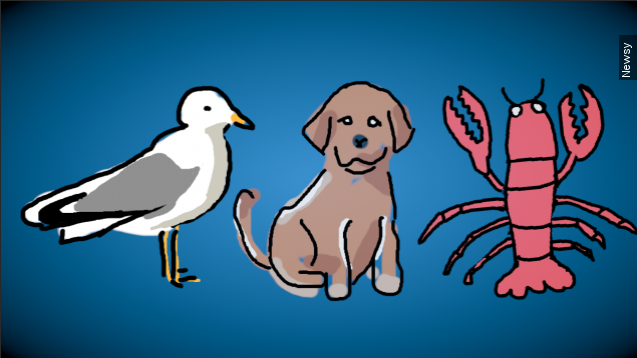 This week's top 3 animal stories feature a lobster, a seagull and a dog.

Some days we all just need to laugh. And today is definitely one of those days. That's why we're highlighting three animal stories that are sure to make you chuckle.

First up, take a look at this giant lobster. It weighs a whopping 23 pounds.

It's also the new star of Long Beach, New York, where Jordan Lobster Farms is located.

Thankfully, this lobster's sheer size has saved it from being eaten. Instead, the wholesaler is donating the crustacean to the Long Island Aquarium.

So, there's this seagull.

No, not that seagull. Instead, we're taking about one that's taken up residence at the top of a Seattle, Washington, parking garage.

"She dive-bombs anyone who dares to park here, like Cameron Carlson. First, mama lands in front of his car. When he gets out, she practically skims the top of his head," a KOMO reporter said.

And finally, the Arlington Police Department in Texas was called in when the local animal shelter got ransacked.

But one look at the surveillance video showed them this: The culprit was actually a four-legged pup named Sadi. She'd managed to escape from her cage and make a big ol' mess.

The department ended up writing on their Facebook page, "In lieu of an 'arrest' we found Sadi a Furrever Home so she can continue to have lots of fun."