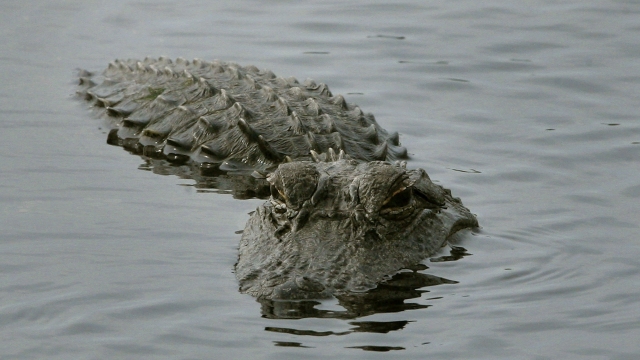 Alligators seem to be invading the news — and one of them might be 15 feet long.

Alligators. They're big, terrifying and have more than twice as many teeth as human adults, which makes them even scarier. And they've taken over the news recently.

We'd be remiss if we didn't start with the gigantic gator spotted walking across a Florida golf course. Newsy's partners at WFTS obtained this footage from Charles Helms.

"You ever seen anything that big? I think that's two guys in an alligator suit. Dave, get next to it for perspective," a golfer said.

According to the National Zoo, the average size of an alligator is just over 8 feet for females and 11 feet for males.

But Helms estimated the alligator he spotted on the golf course was as long as 15 feet.

Next, a Georgia couple has a new neighbor living in their pond: a 5-foot-long alligator.

Bill and Janice Compton believe the gator got into their private pond by way of the Yellow River, which is only about 75 yards away.

"He seems to be a pretty good neighbor. He's not making any demands on us, so we're leaving him alone," Janice Compton told WXIA.

The couple did alert the state's Department of Natural Resources, which says on its website there are approximately 200,000 alligators living in Georgia.

We saved the most terrifying for last: A recent study says alligators are forced to share their south Florida home — because Nile crocodiles are being seen there for the first time.

As the name suggests, Nile crocodiles are from Africa. And they're way bigger than American alligators.

While our native gators can weigh up to 1,000 pounds, Nile crocodiles weigh in at more than 1,600 pounds when full-grown.

This video includes images from Getty Images and G. Dawson / CC BY 2.0.