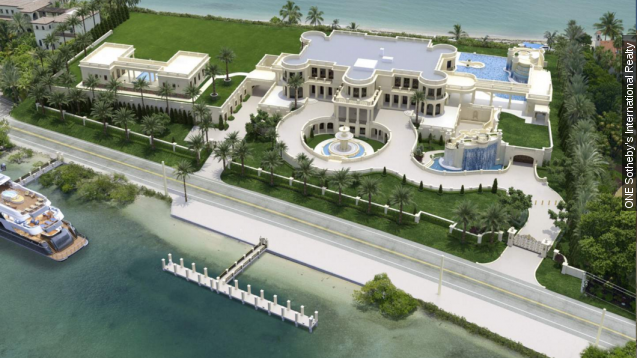 A look at the top 3 items the Powerball winners can purchase. Heads up: Paying for college or taking a vacation didn't make the cut.

This past week, there was so much anticipation around the record-breaking $1.56 billion Powerball jackpot — and someone ultimately won it. Three someones, actually. So to be helpful, we decided to come up with a list of items these lucky people should consider buying with the $187.2 million they'll each get to take home after taxes.

First up is a new place to live. Unfortunately, you won't have enough to purchase the Playboy Mansion, which is on the market for $200 million and comes with live-in resident Hugh Hefner.

But a private island can be purchased. It'll only cost $160 million to buy this 110-acre one off the coast of Thailand.

Or you can pack your bags and move to Florida where the mansion nicknamed Le Palais Royal is on the market for $159 million. (Video via ONE Sotheby's International Realty)

The architect drew inspiration from France's Palace of Versailles, and the more than 70,000-square-foot space includes 19 bedrooms and 20 bathrooms.

Next, like a lot of multimillionaires, these winners should consider buying a sports team.

Since you only have about $187 million to play with, don't bother looking into purchasing a pro football or baseball team. They're just too darn pricey.

But after taking a look at Forbes' list of hockey teams, it looks like the NHL is the way to go. If you scroll all the way to the bottom, you'll see the Florida Panthers are worth only $186 million, which is just within the winnings.

Don't forget about purchasing a new form of transportation. And when you have this much money to burn, why not think big?

Like a private jet. The Gulfstream G650 is considered top-notch. And with a price tag of $65 million, you and 18 of your closest friends can fly around the world in style. Just note, you'll have to stop every 7,000 miles to refuel. (Video via Gulfstream Aerospace)

Or if having two feet planted on the ground is more your speed, how about a $3 million motor home? (Video via Marchi Mobile)

A writer for the BBC described one of the RV's most unusual features, saying, "It also offers a 'Sky Lounge,' replete with banquette seating that rises out of the body to create a rooftop nightclub, complete with mood-lit canopy, audio system and wet bar."

And for the winners who don't want to spend a lot but still want to be the talk of the town, consider getting this Killer Whale Submarine. The two-seat watercraft will set you back only $90,000. (Video via Hammacher Schlemmer)