Top 3 Viral Videos Of The Week 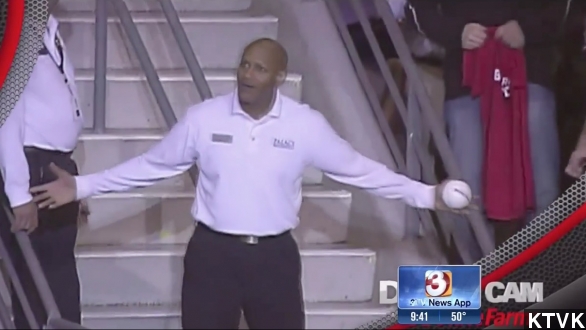 Newsy's top three viral videos are sure to make you chuckle. We picked everything from an epic buzzer beater to a dance-off caught on video.

It's time to rest your bellies after what we hope was an epic Thanksgiving dinner. So, sit back, relax and laugh at Newsy's top three viral moments of the week.

Our no. 3 pick involves something nobody really loves to do. In fact, there are webpages to even help the process go faster, but here's someone you may want to hire to help you clean up all those holiday dishes. (Via BuzzFeed)

JOSH ELLIOTT: "A lot of dishes to wash in the house."

LARA SPENCER: "Are they getting clean, too?"

Wow, that was crazy fast.

Our second pick is a dance cam dance-off! It happened live on the Detroit Pistons dance camera. (Via YouTube/DetPistonsOfficial)

"Hahahaha. That is awesome. You've got to love this video."

"That hilarious dance off took place between that little guy and a basketball usher."

"And this thing went on, gosh, for what? Two minutes or so at least." (Via KTVK)

ABC says it was 11-year-old Antwan Alexander's dream to be on the dance cam. That wish came true. Who do you think won the dance-off? We're giving it to Alexander, mostly because he's cute.

And our most exciting viral video of the week is almost hard to believe, so we will just let you watch with your own eyes. (USA Today)

Thanks to the play, Indiana's Huntington University beat Marian University in a very epic fashion. (Via NBC)

Make sure to check back next week for Newsy's new list of top three favorites.