Meat Producer JBS Expected Its Systems Across U.S. To Be Back Online 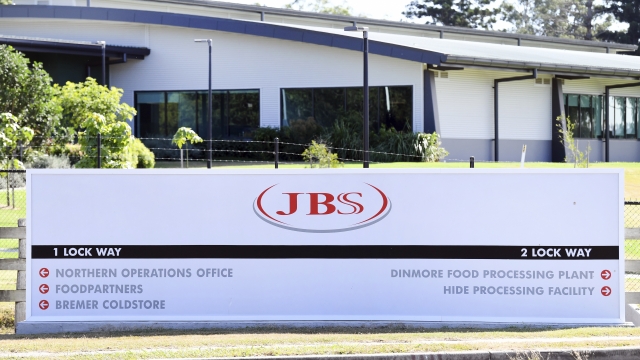 Top meat producer recovering after it was hit by a cyberattack.

Meat producer JBS says its plants are coming back online — days after a crippling ransomware attack.

The United Food and Commercial Workers International Union, which represents thousands of JBS employees, said all of the company's beef plants in the United States were shut down… impacting a fifth of all U.S. beef production.

After the hack, the USDA said wholesale prices for choice cuts of beef sold in boxes on Wednesday rose by about $5 per hundred pounds. That’s on top of prices already elevated amid the pandemic and higher demand worldwide.

JBS sells under the Swift and Pilgrim brands among others at stores such as Costco and Food Lion.

Still, Kevin Grier, a livestock and meat analyst, says we may not feel the immediate impact in the grocery aisle.

He says cattle feeders will be hit the hardest.

The White House says the ransomware attack appeared to be coming from a criminal organization based in Russia. Hackers took down JBS' IT system, affecting plants in North America and Australia.

"For most consumers that are impacted by this stuff," QOMPLX CEO Jason Crabtree said. "Remember that if someone has the ability to encrypt your data, they have the ability to take your data."

The company says it’s “not aware of any evidence at this time that any customer, supplier or employee data has been compromised.”

It’s unclear whether JBS paid a ransom or not. It’s also unclear how much of a ransom was demanded.

"This is the hardest question an executive has to answer: how much is the ransom and how much is it going to cost us to rebuild from scratch if we don't pay the ransom?," Dr. Eric Cole, founder & CEO of Secure Anchor, told Newsy. "Do we just pay the ransom, get back up and running and then put intense effort into implementing proper security measures?"

Newsy reached out to JBS for comment but did not immediately hear back.