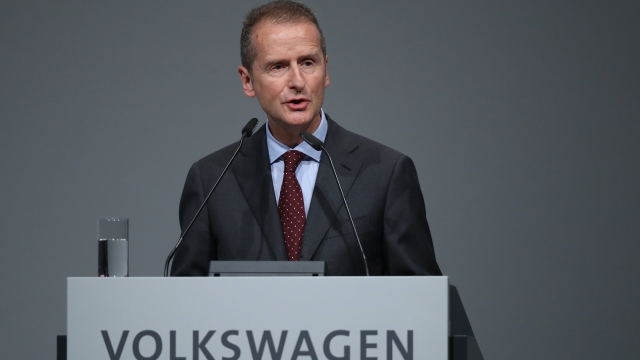 Three current and former Volkswagen executives have been charged with market manipulation over a diesel emissions scandal.

Volkswagen CEO Herbert Diess, the company's chairman and its former CEO were all charged Tuesday with stock market manipulation.

German prosecutors allege the executives failed to inform investors in a timely fashion about the huge financial risks of a diesel emissions scandal.

In 2015, Volkswagen admitted to using illegal software to cheat on emissions tests. That meant millions of its diesel-powered vehicles were not as efficient as VW had promised.

The scandal spawned lawsuits and set the stage for dealings with regulators, dealers and customers. It's cost the company roughly $30 billion.

Shareholders were also hit hard. The company's stock plummeted by nearly 50% after the allegations were brought to light.

Company lawyers said Diess will remain CEO because he did not join Volkswagen until 2015 and didn't know the extent of the scandal.

Volkswagen told the Washington Post: "The company has meticulously investigated this matter with the help of internal and external legal experts for almost four years. The result is clear: the allegations are groundless."

Last year, Diess was promoted to CEO of the entire Volkswagen Group, which includes the Audi, Bentley, Bugatti, Lamborghini and Porsche brands.