Tornado Alley Is Expanding, Hitting More Southern States Than Ever 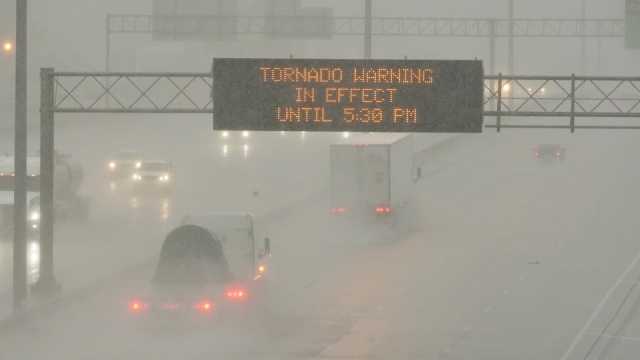 Scientists aren't completely sure what's causing the shift, but climate change could be partly to blame.

Lately, there have been many tornadoes in places where there normally haven't been.

This is because "Tornado Alley" is expanding, and millions of Americans in the a region of the Southeast known as "Dixie Alley" are now at a greater risk for tornadoes than those in the Midwest.

Tornado Alley has historically been known to stretch from Texas to South Dakota, but it's starting to broaden outside of its existing pattern.

According to USA Today reporting, 20 U.S. states saw an increase in tornado activity between 2000 and 2019, compared to data from 1980 to 1990. These states outside tornado alley include Alabama, Kentucky and Mississippi.

Scientists aren’t entirely sure why this shift is happening but point to climate change as a possible explanation.

Tornado season typically runs from March through June, but they can really happen anytime. They're most common here in the U.S. Most countries combined see 200 to 300 tornadoes per year on average. In the U.S., the number is over 1,200 a year, and that’s largely because of U.S. weather patterns.

When warm moist air from the Gulf of Mexico mixes with dry air from the West, it creates the wind pattern for a tornado. It starts out spinning horizontally, but as the warm air from the gulf continues to rise, it tilts the tube vertically, causing twisters to form.

While it's not completely clear why the location of these storms is expanding, gulf waters are getting warmer all the time, which can intensify these storms.

Tornadoes are measured on the Enhanced Fujita Scale. It has six categories ranging from weak to catastrophic. Between 1950 to 2019, more than 60,000 tornadoes were reported, and more than half were E1, moderate tornadoes, or stronger.

An AccuWeather report predicts that this year we could see an even bigger number of tornadoes and severe storms.

As these storms increase, what can we do to prepare for them?

Recently, legislation was introduced to improve tornado forecasting and warnings. This bill has been in the works for awhile but has advanced by a Senate committee. It would require the National Oceanic and Atmospheric Administration to evaluate its IT infrastructure to get information out to the public faster.

NOAA is working to simplify how alerts are communicated to make them easier to understand while also taking into account the socioeconomic factors that put people at risk. The goal of the new bill would make warning times go from 15 minutes to one hour, giving people more time to find shelter.