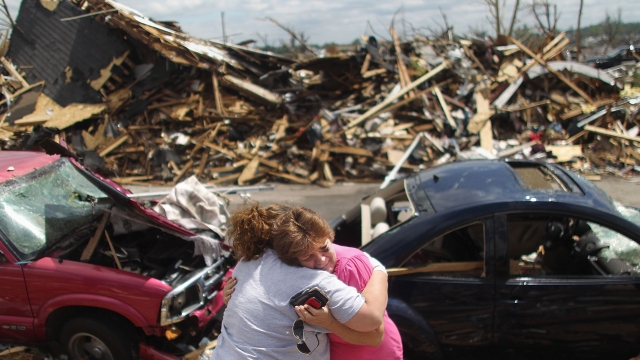 Several tornados ripped through Alabama and Missouri in 2011, which account for a large chunk of the states' weather-related deaths in recent years.

It was one of the most deadly years in the history of the U.S. for weather-related fatalities.

Both Alabama and Missouri saw a significant spike in deaths due to tornadoes in 2011, which is why they rank first and second respectively on the list of states with the most dangerous weather over the last five years.

According to a report from 24/7 Wall St., 85 percent of Alabama's weather-related deaths in the past five years occurred in 2011. Tornadoes killed more than 230 people, injuring scores more in the state that year.

"My gosh. Look at the size of this tornado. This is a massive, massive tornado. Folks, please take cover immediately," WIAT's meteorologist said.

On April 27, 62 confirmed tornadoes tore through the state during "The Tornado Super Outbreak of 2011."

"Just tornado devastation as far as the eye can see. Off in the distance there, beyond the firefighters there, they're doing search and rescue. We even have fires erupting. It really is an unfolding scene," The Weather Channel's Mike Bettes said.

The EF5 tornado, the highest score on the tornado intensity scale, killed 162 people. It remains the seventh-deadliest tornado in U.S. history and the deadliest in the last 60 years.

The "Tri-State Tornado" in 1925, spanning through Missouri, Illinois and Indiana, killed 695 people.

Nevada also ranked high on 24/7 Wall St.'s list with heat being the main cause for many of the weather-related deaths.

This video includes a clip from ABC and images from Getty Images.