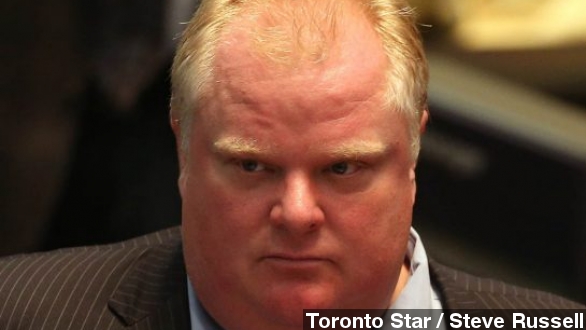 The council voted overwhelmingly in favor of two motions that strip Ford of his emergency powers. Effective immediately, Ford also won't be able to appoint and fire committee chairs or the deputy mayor. (Via BBC)

Those responsibilities will now fall on the shoulders of Deputy Mayor Norm Kelly. Ford can still declare a state of emergency in Toronto, but Kelly has to decide how to manage it. (Via The Globe and Mail)

Even though Ford openly admitted last week to a crowd of reporters that he has purchased and smoked crack cocaine, the controversial mayor says he won't leave his position. (Via CBC)

The admission was only the beginning of Ford's bizarre and inappropriate behavior.

Just three days after he revealed his drug use, a video of Ford furiously ranting about wanting to kill someone surfaced online. (Via CTV)

"No holds barred, brother. He dies or I die, brother. Brother, you've never seen me f---ing go. You think so, brother? But when he's down, I'll rip his f---ing throat out. I'll poke his eyes out." (Via Toronto Star)

And Thursday, when responding to reporters about new allegations of drunkenness, drug use, and the verbal and physical abuse of former employees, Ford let out a spew of sexually explicit, vulgar language on live TV. (Via Toronto Life)

"Olivia Gondek says that I wanted to eat her p---y. I'm happily married. I've got more than enough to eat at home." (Via CNN)

Ford has reportedly vowed to fight the motions that stripped his emergency powers in court, saying, "Obviously, I can't support this, but I perfectly understand where it's coming from."