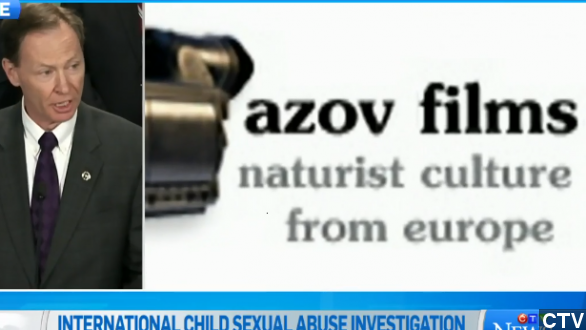 "These 300 children have had their lives altered forever. The images of them become a permanent record of sexual abuse of a child."

"There will be further arrests, and I would imagine there will be more children that will be saved because of it." (Via CTV)

Police say they first heard of the possible operation through a hotline tip in 2010. That led them to a business on the west side of Toronto — and the arrests of 348 people. (Via CBC)

"What they believe was happening is that material — child pornography material — was being shipped into this Toronto location and then distributed."

Way's website Azovfilms.com used to advertise what it called "naturist" films, which the site insisted were not child pornography. After shutting down the company in May 2011, police and postal inspectors began tracking down people ordering the films. (Via Wayback Machine)

During a Thursday morning press conference, police said about half of those arrested are from the United States or Canada. Toronto police say many had close contact with children, including 40 teachers, nine doctors and nurses, 32 people who volunteer with children, six police officers, and nine pastors or priests.